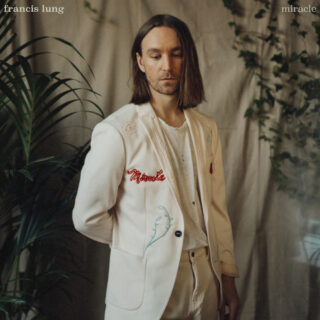 Songs that deal with the grinding shitstorm of drug and alcohol addiction rarely sound as squeaky clean and undefiled as these. But what Francis Lung tries with tracks on Miracle is to explore the eternal, chaotic netherworld of dependency via an (almost) unrelentingly chirpy approach. If this sounds improbable, you’re not far off. This is the second full-length solo release from Manchester-based multi-instrumentalist, producer and ex-Wu Lyf bassist, Francis Lung. And musically, this record more or less picks up from where Lung’s first solo record A Dream is U, left off, if not in its tone. These are slick, professionally crafted tunes, with a familiar melodic approach to the lo-fi indie pop format.

There’s theatrical, bounding piano and jangly guitar repeats on ‘Say So’, whilst ‘Miracle’ draws heavily on the gymnastic guitar chord sequences from early Mac Demarco, and Days-era Real Estate. ‘The Let Down’ happily jerks the balance over from lo-fi to pure, elastic pop music. Meanwhile, lyrically, the record comes with the promise of the pared-back charm of Judee Sill and Elliott Smith, but it’s pretty difficult to hear anything quite like their transfixing rawness or poetic efficiency in these lines. On the final track, Lung cheerfully and earnestly eggs someone on to get themselves together – “Get up, get something going, do something, do it” – whilst artificial-sounding finger clicks begin, and a slick guitar rhythm builds. It can begin to feel a bit naff.

One exception on the record is ‘Comedown (Again)’, where Francis Lung shows potential. It’s a measured and tentative appeal to someone knee deep in the grinds of addiction, and the melody is spare and affecting, and the vocals splinter. The airy, happy-go-lucky tone found elsewhere on Miracle feels distinctly absent, and there are echoes of regret and shame in its place.