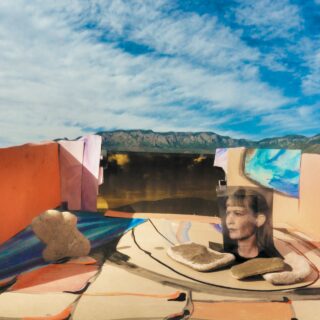 No matter how titillating or violent, there’s a constant, immense delicacy to Jenny Hval’s work, in both poetry and sound. Classic Objects, the Oslo-born artist’s first release with 4AD, is one of the gentlest releases in her discography so far. There’s a sharp musical contrast to her work with Lost Girls on  2021’s wild, sprawling Menneskekollektivet, or even the pointed trance of 2019’s The Practice of Love. Here, her classic brand of ambient pop feels at once more relaxed and more organic.

Across the record’s lyrics, Hval pursues a poetic, Tender Buttons-like fixation on the inertia of its titular objects. On ‘American Coffee’, a brick can rend or build; ‘Classic Objects’ contrasts organic, human hair with the marmoreal and the metallic; ‘Cemetery of Splendour’, sung to a long-dead subject, is measured more in the sight of unmoving natural artifacts than in the emotion of eulogy – Hval’s eyes trace a path from trees to sticks to rocks to bamboo leaf and then bamboo leaf again. “I find spiders everywhere,” she sings on ‘Year of Sky’, “They show me cracks in the corners, the expanding universe.” Placed in contrast to the liveliness of Hval’s conduction, the neutral potential of inanimacy itself is stark, and full of unknown promise.

Directly shaped by the pandemic’s confines, this album feels like a breather in Hval’s career as she looks back on her life with wistfulness, amusement, and thoughtful regard. On opener ‘Year of Love’, she ponders the paradox of her art’s infinite interpretations: “A year later I’m on stage when a man proposes to a woman right in front of me, in the middle of a song I thought I knew what was about.” Deep in thought and re-evaluation, Classic Objects is delicate but wilfully strong – an appropriate milestone in Hval’s legacy.