Klein makes music that feels barely there one moment and suffocating the next. Her desolate and remarkable sound collages operate in a dreamlike space that threatens to become a nightmare from moment to moment. On records like Lifetime and Frozen, she grounded her work with field-recorded snippets of conversation that conjure a strong sense of place – an emotional connection for the listener to hold onto.

With Harmattan, the South London experimental composer offers no such grounding. The record is intentionally oblique in its approach to classical, jazz and drone. The few vocals, such as Charlotte Church’s warped singing on ‘Skyfall’, are as spectral as the sounds around them. Named after the dry West African season, Harmattan can feel stifling and alien to those unfamiliar. But there’s a fluidity and depth that makes it no less exciting than what has come before.

‘The Haunting of Grace’ is a desolate ambient piece that eventually blooms wide. A stray harmonica morphs the track into a futuristic folk lamentation. The following ‘Ray’ masters that “barely there” feeling, inducing a state of panic each time a wash of smothering noise rises up in the mix. And then there’s ‘Hope Dealers’, a heartfelt tribute to grime and Channel AKA that communicates a lifelong passion with blaring organs and a slow-motion piano melody.

Harmattan zeroes in on tone and feeling to captivate, and even when you’re not quite sure what the feeling is, it’s no less felt. Its opening tracks ‘For Solo Piano’ and ‘Roc’ are the most standoffish moments, daring the listener to find a beating heart behind jarring chords and breathy horns. After the record’s hypnotic loop has taken hold, hidden depths reveal themselves as the dust begins to clear – or we get used to the stifling air quality. 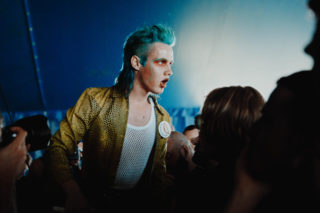