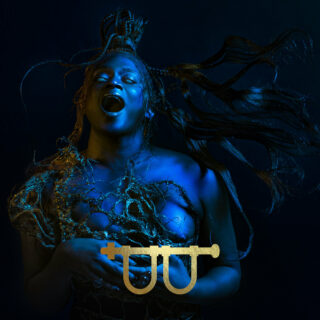 Experimental electronic artist Lotic’s music has always represented something of a confluence. Growing up in Texas, her youth was soaked in the ambition and pageantry of Americana. However, Lotic as an artist came to prominence when she upped sticks and moved to Berlin in her early 20s.

It was in the German capital where she crafted her baroque, grand, and abrasive electronic sound, playing as a resident DJ at the city’s infamous Janus club night. Janus’ non-stop hedonism fed an outsider culture that attracted DJs who sought to discover sounds that didn’t yet exist. Even in these surroundings, Lotic stood out.

She quickly got into the habit of releasing lauded EPs, before putting out her ferocious 2018 debut album Power. However, it feels that this was all a polite preamble for second album, Water.

Across nine breathtaking tracks, Lotic bursts the banks of her imagination, fetching sounds and tempos that hitherto felt confined to dreamspace, all guided by the surreal swirl of her voice.

Water is simply awash with supreme moments of serene and scintillating musicality. From the album-opening procession of harmonic but formless reverberations found in ‘Wet’, to the stalking lunar energy of ‘Emergency’ that courses with a tidal rhythm, to the bombastic drums that stampede through the chthonic opening of ‘Come Unto Me’ like a These New Puritans track, to the ANOHNI-meets-Burial-meets-Joanna Newsom-like pleasure found in the otherworldly ‘Always You’, There isn’t a moment to be found that isn’t dripping in sincerity, surprise or invention.

Water ends with the soaring melodrama of the nearly ten-minute ‘Diamond’, a track only rivalled by MAGDELENE-era FKA Twigs in ambition, fragility, sensuality, and poise. The closer’s marching menace builds to a pulsating tsunami that drowns you in a transcendent flurry of drums, strings, echoes, heart-wrenching beats, and Lotic’s dramatic soprano vocal. It casts one final ripple in this truly revelatory record. A masterpiece, writ in water.