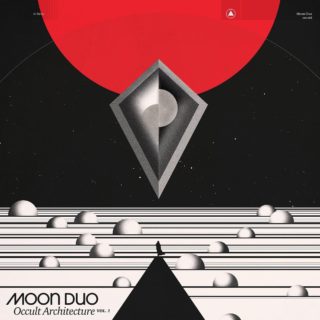 Taking the cycle of the seasons as its muse, the first instalment of the work sees Ripley Johnson and Sanae Yamada continue to draw on the same touchstones that have shaped their sound to date – Suicide and Silver Apples are still in there, of course – but they have tightened things up, sharpened the edges, and sprinkled some added dissonance for good, foreboding measure. Debut single ‘Cold Fear’, for example, crystallises the album’s sound, channelling WIXIW-era Liars as it builds from a solitary tinny snare to become a wailing, distortion pedal-driven behemoth. It rocks, but it does so within a very exact framework.

Elsewhere, ‘Creepin’ is perhaps Moon Duo’s first real anthem, while ‘White Rose’ is an epic ten-minuter that feels touched by the hypnotic hands of Klaus Dinger and Michael Rother. All good so far; I’ll get back to you on Vol. 2.