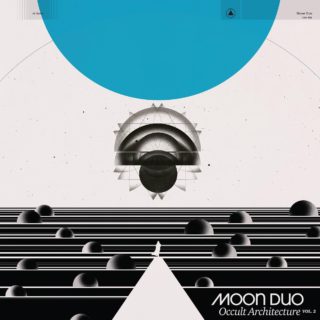 I said I’d get back to you regarding the second volume of Moon Duo’s ‘Occult Architecture’ series and here we are, just five months on. Where ‘Vol. 1’ sought to explore the group’s yin – their darker energies – this time they are embracing the brightness of their yang. Mixed separately from its older sibling at the height of summer in their hometown of Portland, it immediately feels like a much lighter piece of work, and at five sprawling tracks averaging eight minutes apiece, it is an absorbing and genuinely uplifting journey. While Suicide were indelible influences on ‘Vol. 1’, this time it’s more ‘Dream Baby Dream’ than ‘Ghost Rider.’

But the production is also crisper, the beats bigger, so that Air, Cut Copy, and Black Moth Super Rainbow’s sunnier moments are much more accurate antecedents, while the guitars on ‘New Dawn’ and ‘Sevens’ again recall those gorgeously weightless wah-wah sounds created by Michael Rother on Neu!’s early work. Apparently the album is supposed to reflect the, “hidden energies of rainclouds and sunshine.” I think they’ve done a fine job.

Listen to the album in full here