No-one in the world of neoclassicism champions the piano as passionately as Nils Frahm. In 2015 the German composer founded Piano Day to honour the instrument, taking place on the 88th day of each year (in reference to the 88 keys on a piano). He was also the mind behind the Klavins 450; the world’s tallest piano at over 14ft, which he built especially to record his album Solo. To celebrate Piano Day this year Frahm has unveiled Empty, an LP consisting of 8 solo piano pieces originally conceived several years ago, but put aside after he suffered a hand injury.

Written just before 2012’s Screws, Empty invokes a similar stylistic language, as aesthetically these 8 compositions feel beautifully tangible and intimate. Some of the true magic of the album comes from hearing the sound of the instrument respond beneath Frahm’s hands; tiny mechanisms within the piano gently slide and reverberate, almost as if it’s a mortal being. It’s also the 37-year-old’s most delicate and modest work in recent memory, as the electronics that punctuated the epic All Melody are absent, instead the focus is solely on the piano.

This results in one of the more meditative and insular listening experiences of the year so far, as if it’s meant only to be heard in times of solitude, akin to the work of Poppy Ackroyd and Ólafur Arnalds. Each track has a soothing, slumberous tone, from the hushed lullaby of ‘A Shine’ to the ambient glow of ‘Sonar’, while the rippling keys of ‘No Step on Wing’ pour down like a raincloud opening up over a desolate forest in the middle of the night.

Though the title may suggest otherwise, Empty is anything but a hollow affair; instead it’s a gentle experience that wants to provide peace in these times of anxiety and uncertainty. It shows Frahm at his most intimate and minimal, and further achieves his goal in showing the resonant power of the piano. 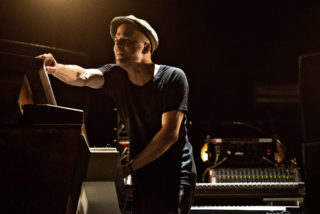