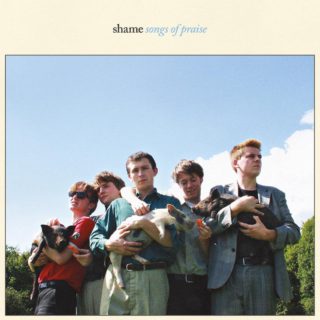 School friends Shame wrote their first song and played their first show when they were 16-years-old, to four mates at The Queen’s Head, Brixton – the same stale south London pub that was Fat White Family’s petri dish. The song was called ‘One Rizla’ and everything about it – and its inclusion on the band’s debut album – says a lot about the five young men who’ve made ‘Songs of Praise’.

It pretty much starts with singer Charlie Steen pre-empting criticism and owning it, as he bluntly sings: ‘My voice ain’t the best you’ve heard / And you can choose to hate my words / What do I give a fuck?’. As a punk singer who blurts his way through songs like Mark E Smith or an Oi! bruiser, Steen knows his limits, although perhaps he’s unaware of just how wonderfully ‘Songs of Praise’ hangs on his deranged, deep yell. He doesn’t care about what we make of him, of course, and although that might seem like youthful bluster, it’s a vital ingredient in any half decent punk debut, and is a recurring theme here. ‘I don’t want to be heard if you’re the only one listening,’ he sings as softly as he ever has on ‘The Lick’, because ambition is clearly on Shame’s radar, too; ‘I like you better when you’re not around,’ he chants on ‘Tasteless’.

And then there’s ‘One Rizla’’s tune – the kind of perfect ragged sing-a-long that The Cribs may have managed once or twice by now, but that Shame nailed on their first attempt. Steen says that the song is still around due to its honesty, whilst also drawing attention to its immaturity. “It shows where we were at that time and when we started the band,” he says, which is perhaps most telling of all. Because when you listen to ‘Songs of Praise’ the big take away is how it sounds like a living scrapbook of a group of mates still working it out.

‘One Rizla’ is no more representative of ‘Songs of Praise’ than the opening and quite brilliant ‘Dust On Trial’ – a song that features a nu metal whisper at one point, having rumbled on to the sound of an increasingly irate Steen who eventually howls: ‘Just. One. Step. CLOSER TO ME!’ Or the sideways glancing ‘Concrete’, with its call-and-response vocals and Rakes-ish jitter.  OR the drooling ‘Donk’ – the album’s most straight-up punk moment via a less friendly ‘Popscene’ by Blur.

Shame continue to careen around in this exploratory way, inevitably hitting downward strumming post-punk (‘Lampoon’, about standing up for yourself and freedom of speech) and most oddly arriving at a dopey baggy tune called ‘Friction’ – an ode to Happy Mondays and a convincing one at that, even if it’s hard to distinguish if it’s more or less at odds with the group than the closing ‘Angie’, the album’s biggest misstep and Shame’s ‘Champagne Supernova’ – a little limp after all the shouting. On that note, the sound of Oasis is something of a recurring presence, particularly on the lead guitar of ‘Gold Hole’ and certain vocal parts of ‘Tasteless’, from a time when Oasis were any good.

And yet for all their exuberant diving into the furrows of British rock history, Shame feel like a band searching rather than one that’s lost. They’re a young bunch, but a politically engaged, angry, wise lot, smart enough to not overthink something as instinctive and fun as your first album. It works because they’re so convincing in each of their furious explorations.