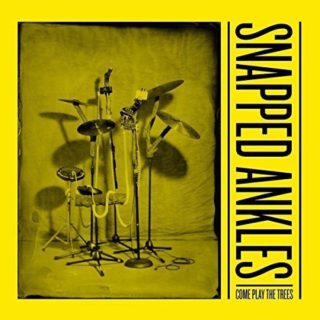 Despite their distinctive uniforms – shaggy and leafy, like folkloric beasts said to eat children who didn’t finish their vegetables – East London’s Snapped Ankles seem like two different bands. There’s the ecstatic live band which capture a raw, prehistoric energy, incessantly beating drums to the frantic splicing of depraved films; and then there’s the other band, content in playing hyperactive post-punk for the ailing state of the nation. Rather than synthesizing the two into a modern-ancient hybrid – a dissenting cry of shamanic fury – Snapped Ankles’ debut LP ‘Come Play The Trees’ seems to have been made by the latter group alone.

This isn’t to say this post-punk revival record is no good. ‘Let’s Revel’ contently rolls about in post-apocalyptic wasteland muck, and ‘I Want My Minutes Back’ is an indie club classic in waiting, bounding forward uncannily like The Fall’s recent work. But an air of hastiness hangs over everything, as if Snapped Ankles’ debut was put together because, at this point, something had to be.

Across its slight 9-track length – bookended by a near-indistinguishable intro and outro – we are treated to ‘Jonny Guitar Calling Gosta Berlin’ and ‘True Ecology’; one a single from their EP ‘The Best Light is the Last Light’ from earlier in 2017, the other a reworked version of a tune from 2012. Both are animated and animating, but they do indicate a lack of anything strictly ‘new’ on this debut LP. What’s more, the material we’re given doesn’t come close to bottling Snapped Ankles’ rapturous lightning.

Ultimately, ‘Come Play The Trees’ is unique among debut albums; it’s less an opening statement and more an impasse, a sign-post to something greater. Perhaps Snapped Ankles the shamanic art band, the one writhing in glorious sound and fury on stage, will rear its venerable head on record yet.