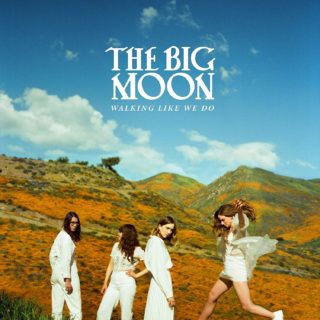 There’s a certain symmetry between The Big Moon and Girl Ray. Both bands issued their indie-pop, girl gang debuts in 2017. Within months of each other they’re releasing their follow-ups, having scrapped initial demos that sounded too similar in order to stretch themselves as musicians.

In the process they’ve cleaned up their sound and become more unashamedly pop. Yet where Girl Ray have created a wonky amalgam of R&B and indie, The Big Moon have introduced musical maturity and space in their arrangements.

The London quartet have kept their infectious overlapping harmonies on Walking Like We Do but they’ve ditched the grungy guitars and sidelined tracks about romance. In their place are pianos, trumpet, flute, and songs that deal with social inequality (‘Dog Eat Dog’) and empowerment in times of social flux (‘A Hundred Ways To Land’).

It’s undoubtedly more professional than their debut, although Juliette Jackson’s vocal hiccup on the folk influenced ballad ‘Waves’ suggests they’re still not taking themselves too seriously. There’s also still plenty of feel good hooks, from the Franz Ferdinand indie-disco of ‘Don’t Think’ to the explosive uplift of ‘Your Light’, which sounds like a cousin to Sharon Van Etten’s ‘Seventeen’ during the opening bars.

The second half of the album palls slightly, with ‘Barcelona’ lacking the band’s usual spark or playfulness and ‘Take A Piece’ being a slightly flat bridge to Love In The 4th Dimension. But overall Walking Like We Do signals a band growing up, having fun, and developing their sound.