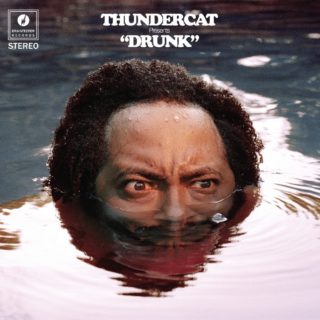 Thundercat, aka Stephen Bruner, has crafted three impeccable albums that fuse jazz, funk, fizzing electronics and cosmic soul vocals – but up until this point, he’s been known for his bass playing on a myriad of other projects rather than for his own work. This is understandable in part; he’s a stunning musician, whose spent years crafting a unique style that’s fluid and biting simultaneously. On Kendrick Lamar’s ‘To Pimp a Butterfly;, his twirling runs added an otherworldly tone to the buoyant hip-hop instrumentals. On Flying Lotus’s ‘You’re Dead!’, he could evoke an outer-body experience with a few flicks of his fingers. Up until now, he’s been an excellent supporting contributor more often than the star. ‘Drunk’ could change that. It’s Bruner’s boldest project, and one that forces you to hear his own voice above all others.

Despite containing grin-inducing grooves and shimmering production, the persistent mood on ‘Drunk’ is melancholy. Whether he’s telling goofy stories about wanting to be a cat or leaving the club without his wallet, there’s a numbness underlying all. This feeling is brought out skilfully in the album’s patchwork structure; its brief songs fade in and out of focus, some after only thirty seconds. It’s a mood that mirror’s Dilla’s ‘Donuts’ – a record Bruner samples in the hazy crowd noise of ‘A Fan’s Mail’; flashes of happiness flicker though, but the highs presented on the cosmic adventure ‘Jameel’s Space Right’ or the giddy drum circle ‘Day and Night’ quickly dissipate, replaced with vulnerability. “I’d rather be out of my mind than to be dead alive” Bruner shrugs on the title track. Every other flippant lyric clicks into place.

Along with a tight nit group of collaborators – usual suspect Flying Lotus helms most additional production duties – Thundercat has crafted a stunning look at inebriation with more poetry lurking behind its heady instrumentals than initially visible. Melodies coil around themselves over the course of the album, swirling back to gloom after new flashes of colour.

That’s not to say Thundercat has gone completely down the rabbit hole: the bass solos are just as flashy, his humour is just as pointed, and Bruner’s eclectic influences are, fittingly, just as intoxicating. His soft-rock heroes Michael McDonald and Kenny Loggins pop up for gloriously corny vocal features on ‘Show You the Way’, introduced by a sex whisper from Bruner (“Tell ‘em how ya feel, Kenny”’). Kendrick Lamar and Wiz Kalifa’s verses meld in seamlessly, both MC’s playing to their strengths – woozy introspection and lighter-weilding party anthems, respectively – while wrapped in instrumentals that feel like distant memories playing in real-time.

It’s an impressive album, though one not without its frustrations. ‘Jethro’ is one of the sharpest cuts we’ve heard from Bruner yet, but ends abruptly after just a minute-thirty. It’s the kind of jam you could imagine being extended into a sweaty jazz odyssey, though its ephemeral appearance here does make sense thematically. For some, ‘Drunk’ will feel like little more than a slight collection of half-written thoughts, but the more its lived with, the more it latches on to you. Raise a glass to Thundercat.