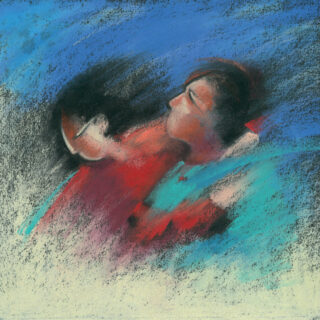 Chaleur Humaine (nothing to do with the Christine & The Queens album of the same name) is the debut by obscure French sibling duo UMAN, originally released in 1992 as a sort of outsider-art experiment after their two earlier stabs at straight-up pop were weakly received. The story goes that the disenchanted brother-and-sister team took a load of then-cutting-edge synths to a studio in the Paris suburbs and made a hybrid downbeat electronic album influenced by new-age music and self-reflection – an hour of MIDI panpipes, Blade Runner bass, rainforest samples and wordless cooing vocals – and despite a few tracks ending up on ’90s chillout comps, the results were lost to history.

Resurfacing via reissue label Freedom To Spend nearly 30 years later, Chaleur Humaine is an uncanny artefact to encounter in 2021, sounding unlike much else in the present day. Direct lines could be drawn from it to the likes of Oneohtrix Point Never and Kelly Moran, two artists also clearly interested in finding the organic within the cold synthesis of electronic music and fracturing the rave aesthetic to breaking point, but even that’s a bit of a stretch: while those two bask in a postmodernist/nostalgist irony when reaching back to the ’90s computer-music aesthetic, and add three-dimensional sophistication to their work, Chaleur Humaine feels both dead straight and awkwardly naive, innocently in love with its own slightly naff futurism and, consequently, cringe-inducing and timeworn.

But while none of that makes it a record you’ll want to revisit that often, it does make for an ethnomusicologically interesting listen, trying to imagine what this pair of pop failures were thinking, hoping for, and imagining in suburban Paris in early ’92, as well as what was going on around them – after all, also in Paris at the time was a nascent Daft Punk, Air, and Etienne De Crecy, suggesting something was definitely afoot in the city. However, Freedom To Spend makes a point of saying that it “does not ‘excavate’ music for celebrating when it was made”, which is a shame, as Chaleur Humaine works far better as a context piece than something standalone: woven not just in Paris’ electronic music, but also into 1992’s tapestry of the UK illegal rave scene that united clubbers and crusties and met its peak in the infamous Castlemorton rave in May that year, and presented alongside post-rave ambient contemporaries like The Orb’s Adventures Beyond The Ultraworld, the KLF’s Chill Out and Aphex Twin’s Selected Ambient Works 85-92, UMAN’s strangely wide-eyed and somewhat callow debut, equally in debt to hippie bohemianism and the possibility of future-facing electronic music, still represents a good jumping-off point to investigate similar musics in different domains. Taken on its own merits, however, the best that can be said of this odd, old record is that it’s a conversation-starter.