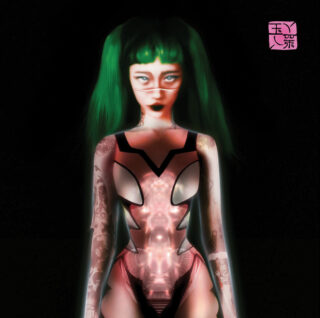 Artistic personas are often seen as a mask, a way for the creator to distance themselves from the art and the audience. But in the right hands, artifice can become more honest than anything else. A well-crafted persona allows artists to communicate on their terms, closing the gap between them and the listener.

On their second album, Glitch Princess, Yeule is about as honest and artificial as you can get. They open with a spoken-word list of likes and dislikes that gets increasingly confessional, all delivered in a glitching deadpan: “My name is Nat Ćmiel. I am 22 years old. I like music, dancing, ballet, crushing up rocks and snorting them, and genderless people…I like touching myself and I like being far away from my own body… I like obsessing over people and then throwing them away…” Their detached robot affectation only heightens the heartbreak.

After the dreamlike simulacrum of their ambient pop debut, Serotonin II, Yeule could have gone anywhere. They chose to follow it with a concept-heavy covers project, Nuclear War Post X, which reimagined the songs of Big Thief, Melody’s Echo Chamber, Grouper and Frank Ocean as haunted relics left after the apocalypse. It revealed another side of their musical influences, and highlighted how hefty their ideas could be when paired with more traditional songs.

With a further focus on songcraft, Glitch Princess is their most direct and affecting release so far. The album remains focused on portraying an inner/virtual world. It’s crushingly dark at points, but no less playful, thanks to their boundless approach to genre blending. While the theming is consistent, the album’s scope is constantly shifting. Take ‘Don’t Be So Hard On Your Own Beauty’, a futuristic jangle-pop tune that’s shocking in its intimacy. It’s subtle, cyclical chorus is easily one of the best of the year. ‘Electric’ is a city-sized epic that morphs Yeule’s voice into a distorted synth line, flattened and infinite simultaneously. Then there’s ‘Fragments’, a broken lullaby that turns into a free-form dance track before melting into nothing.

“Tell me why I destroy everything I touch”, Yeule sings like a villainous Vocaloid on ‘I <3 U’ as digital distortion swallows them up. It’s melodramatic, but in the virtual dream logic of Glitch Princess, you empathise. What could be more human than that?