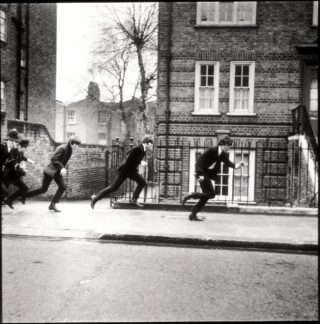 When it comes to band films there’s one that takes the lead and leaves all the others as mere backing tracks – the standout soloist of the species. No, it wasn’t the first, the most expensive or even the most listenable, but, as critic Andrew Sarris put it, it is “the Citizen Kane of Jukebox Musicals.” I am of course talking about The Beatles’ first foray into film, A Hard Day’s Night.

Shot over a few weeks in March 1964 on a budget skinnier than a guitar string, it was never intended as an amazing piece of art. Rather, the Beatles’ team saw it as an extended promo piece for their new LP – a chance to exploit the bands’ explosive rise to the top before the whole thing burnt out and got boring.

The film’s premise is pretty simple; A Hard Day’s Night follows a typical day in the life of the band. Not much happens: they travel on a train, trip around a TV studio, piss about in a park and, of course, play a few songs. That said, a few themes and motifs do emerge.

Firstly, The Beatles are portrayed as overgrown schoolboys. They torment their teachers (or rather, their various managers), tease one another, pull silly faces, put on funny voices and generally prat about. This makes the fact that they’re being chased around by twelve-year-old girls slightly less disturbing – although it is still a bit disturbing – and, since it all feels so natural, it’s a lot of fun to watch.

Secondly, The Beatles undermine or overthrow all authority figures. From TV directors to train passengers, no one escapes their withering words and scouse sendups – class, privilege or having more pounds in the bank won’t win you any favours from the fab four. In the drab (and apparently still black and white) world of 1964 this made them as refreshing as washing your personal parts in minty mouthwash.

Thirdly, the whole thing is done with unadulterated joy. John, Paul, Ringo and George can’t stop smiling (and not because of copious cannabis intake, unlike in the follow up Help!), and deliver their lines with infectious élan. Considering the whole film was a cynical attempt to make some quick cash this is quite an achievement.

Much of this is down to the superb script of Allun Owen, who followed the Beatles around for a week, not only to get sense of their speech but also a feel for what it was like to be on the inside of Beatlemania. It was a far more mundane experience than you might imagine – all studios, cars, stages and hotel rooms rather than anything truly exotic – a truth that Owen’s kitchen-sink script sticks to.

Let’s also not forget the fact that this film is a comedy, unlike many other films reviewed in this column, which are just comically bad. From the Spike Milligan-style puns (reporter: “How did you find America?” Lennon: “Turned left at Greenland”) to the great put downs (The Beatles are described as “pimply hyperboles”) there’s loads to laugh at and, surprisingly, the jokes have actually aged well… perhaps because they were corny to begin with.

Of course, the songs play an important role too. The title track is killer (or gear, to use the correct Beatles parlance), as is ‘Can’t By My Love’, ‘And I Love Her’, ‘Any Time At All’ and ‘If I Fell’. And while the songs might be a bit silly and nowhere near as sophisticated as later efforts – even the tracks on Beatles For Sale, which came out later that year, feel far more mature – they brim with the energy and enthusiasm of youth. Countless other bands have tried this style since, but few (if any) have ever done it as well as The Beatles. No wonder they made people piss themselves.

As for the cinematography, A Hard Day’s Night looks stunning – genuinely. Shot mostly with hand held cameras, it captures the cool feel of French new wave films like Breathless, while at the same time having a harder edge akin to Brit flick The Loneliness of the Long Distance Runner. Furthermore, the fact it was shot in black and white – something that was originally done for budgetary reason – adds a timeless class. There are few things that look finer than the mop tops in monochrome, their crisp Savile Row-cut suits creating hard lines of light on the cinema screen. The bit where Ringo gets lost and walks along a lonely riverbank is particularly striking (his mood and look apparently abetted by a truly heroic hangover).

The songs, the script, the themes and the style all played a part in making this supposedly throwaway film a critical success. However, these alone don’t fully explain the true attraction of A Hard Day’s Night. After all, almost all of these elements were present, and in many cases improved upon, in Help! – and that film hardly holds the same place in our collective conscience.