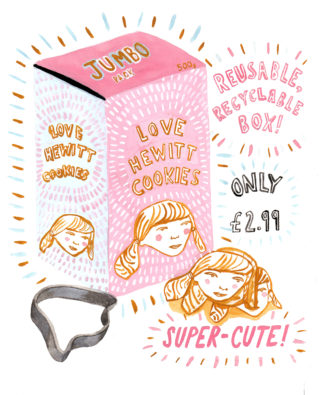 Somewhere after Madonna and Mariah, but before Beyoncé, Adele, Rihanna and Christina, Jennifer Love Hewitt takes her place in the pantheon of female artists. Now, it might have an asterisk next to it or act as one of the hundreds of thousands of footnotes, but if you’ve taken the time to release four (FOUR!) solo albums, that effort should be recognised, even if it wasn’t by the charts.

Back in 1989, a 9-year-old Hewitt could have quit on top of the pop game with Martika’s number-one single ‘Toy Soldiers’, which featured the young Hewitt’s backing vocals. Seasoned by that success, three years later the then 12-year-old Hewitt released her 1992 debut album, ‘Love Songs’, exclusively in Japan where her cookie-cutter cuteness gave her the instant pop success she would never quite recreate.

Unfortunately for her, the transition from a Japanese audience to an American one was less than seamless, even with her turn as Sarah in ’90s teen drama Party of Five. In 1995, (now 16) she watched the questionably titled ‘Let’s Go Bang’ crash and burn, with the album and three subsequent singles all failing to chart. Her self-titled 1996 follow-up fared little better, and when that album and four singles failed to chart once again, Atlantic Records, unsurprisingly, dropped her.

It should have been a decisive blow, but no-doubt convinced she could sing as well as any Disney Princess, Hewitt took a sabbatical before returning like a long-forgotten X-Factor winner. There was some success, too, as she realised her chart dream with 1999 single ‘How Do I Deal’ (taken from the I Still Know What You Did Last Summer soundtrack) achieving lukewarm acclaim in the US and a lofty number eight in the Australian singles chart.

In 2002, the exile was officially over as Hewitt returned with her fourth solo album, ‘BareNaked’, and she continued her chart dominance in Australia, the Netherlands, Germany and the US with places at 31, 72, 75 and 37 in the respective album countdowns. The critics, for the most part, remained split on what proved to be Hewitt’s last tilt at reclaiming the pop stardom of her pre-teens with Q’s eight-out-of-ten review a surprisingly positive highlight: “Admittedly, her FM-friendly singalongs aren’t rocket science, just fantastically effective.” The music magazine chose not to review compilation releases of the Asia-only ‘Cool with You: The Platinum Collection’ in 2006, nor the Brazil-only ‘Hey Everybody’ in 2007.