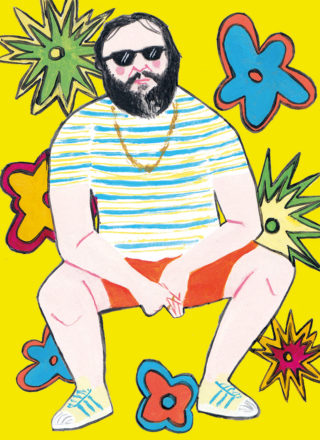 One by one, Reef Younis is looking to the failed music careers of mega celebrities.

In 2009, you might have seen a dishevelled Joaquin Phoenix sat mumbling and gum-chewing his way through a car-crash interview on The Late Show with David Letterman. Bearded, man-bunned and brilliantly apathetic, for every sarcastic barb Letterman sent his way, a monosyllabic Phoenix oozed indifference; the ebb and flow of the conversation dying despite there being a pretty sizeable elephant in the room.

Phoenix had announced that his most recent film, ‘Two Lovers’, would be his last, and that he was quitting acting to pursue a career in hip-hop. Letterman’s curious delight and confusion set against Phoenix’s apparent Hollywood delusion made for cult viewing, as did the subsequent mockumentary, I’m Still Here.

But while Phoenix’s proposed new career ultimately proved to be a brilliantly elaborate hoax that saw a host of A-Listers maintain the charade for the big screen, beneath the full frontal nudity, the faeces, and satire of the film, the beauty that both excited and confounded those paying attention to the unlikeliest of rap game entrances was that Phoenix actually stepped up to the mic as well as the camera, although one was considerably more inglorious than the other.

From grainy clips of a flapping freestyle at a 2008 show in California to a drunken, almost inaudible appearance at a club in Las Vegas, and the more infamous footage of his ‘performance’ at Miami’s upscale LIV club, Phoenix’s gruff, beat-chasing delivery certainly provoked ridicule but also provided an essential touch of craft that made the ruse last as long as it did. Yes, it was bad, but it was also believably bad, falling somewhere between a young Youtube MC’s hurried wordplay and your friend who genuinely believes he can freestyle if someone just gives him a shit beatbox.

Fast-forward a few years and it seemed like Phoenix’s rap career was rising from the flames, this time as a producer. With Pusha T returning from his own hiatus in 2013, a Phoenix/Kanye double-act was reported to have created the beat behind ‘King Push’ but, sadly, it turned out to be a misunderstanding after he’d merely passed the beat on.

Still, when a supposed collaboration with Kanye West and Pusha T needs credible investigation to be disproven, you have to wonder when art imitates life. Either way, as the stories surfaced, I hope Phoenix stepped back and whispered to himself: “I’m Still Here.”