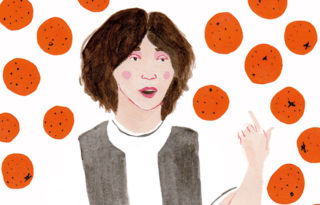 “Reeves smiled even after he was splattered with an orange and narrowly avoided a pear.” That time Keanu played Glastonbury.

Before he embarked on excellent adventures, survived speeding buses and dodged flying bullets in a PVC trench coat, Keanu Reeves was all about the bass. For an actor as heavily typecast as Reeves, Dogstar was his musical equivalent. Falling somewhere between post-grunge and radio-friendly MOR, it was all delivered with a capable consistency that made the most of the band’s 11-year lifespan.

After forming the group in 1991 with fellow actor Rob Mailhouse (who you don’t know from 2011’s <em>A Christmas Pageant</em>), Dogstar would go on to enjoy surprising longevity, only wrapping things up in 2002 as a result of Reeves’ increasingly-heavy schedule as the greatest actor of his generation.

Once they’d worked through some scatological kinks – early band names included Small Faecal Matter and BFS (Big Fucking Shit) – Dogstar opened for David Bowie at the Hollywood Palladium, earned a slot on Bon Jovi’s ’95 tour of Australia and New Zealand, and played gigs with Rancid and Weezer as their support.

At this point, Reeves’ supposed vanity project had squeezed more highlights into a few years than most do in entire careers, Dogstar happily slipping into the American grunge landscape as effortlessly as any equivalent bit-part Britpop act did back in the UK. So Dogstar committed to record, releasing a four-track EP (‘Quattro Formaggi’) and debut album (‘Our Little Visionary’) in 1996. Sad, then, that the album was only distributed in Japan, setting the scene for the second half of Dogstar’s curiously successful story.

With REM, the Manic Street Preachers, Fatboy Slim and Lenny Kravitz gracing the Pyramid Stage at Glastonbury 1999, most would have missed Dogstar’s name listed on the ‘Other Stage’. Veterans of shows in the US, Australia, New Zealand, Europe, and Japan (five times!), their Glastonbury appearance saw the band pelted with apples, tennis balls and chunks of orange to the extent that even the Rome News Tribune felt compelled to report that, “Reeves smiled even after he was splattered with an orange and narrowly avoided a pear.”

So with Reeves becoming a Hollywood name (and key ingredient of an unexpectedly aggressive Somerset fruit salad) the band’s second – and final – album arrived a year later to even less fanfare than the first. The aptly titled ‘Happy Ending’ was as forgetfully competent as its predecessor.