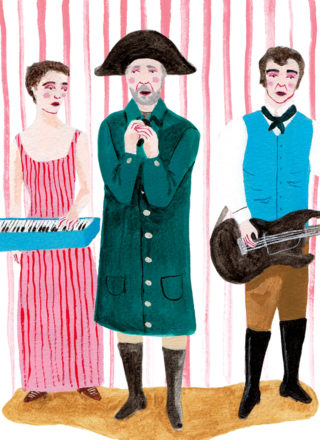 As one of Hollywood’s angriest antipodeans, we’ve become accustomed to Russell Crowe’s silver screen presence as he’s Romper Stompered his way from small-scale actor to box office toddler. From a neo-Nazi skinhead to revenge-driven Roman; troubled mathematical genius to commanding rear-Admiral, his characters have often put him front and centre. But before, during, and even after Maximus Decimus Meridius, John Nash, and Captain ‘Jack’ Aubrey, Crowe was playing a different kind of lead… badly.

It started in the early ’80s when a teenage, pop-singing Crowe arrived with ‘I Just Wanna Be Like Marlon Brando’ in 1982. In 1988, he was busking in the red-lit neon of Sydney’s Kings Cross before going on to form crap band Roman Antix. Fast forward to 1992, and that’s when things stepped up with 30 Odd Foot of Grunts. Or TOFOG, for short.

According to Crowe: “‘30 Odd Foot of Grunts’ was actually an ADR, which is an Analog Dialogue Replacement line, for the movie Virtuosity. It was the fight sequence on the roof, right, and I go in to replace the dialogue because of aircraft or whatever, and it said between 558 and 588, because film was still measured in feet. ‘Please put in 30 Odd Foot of Grunts.’ I just thought it was kind of snappy. Just rolled off the tongue.”

As the frontman of TOFOG, Crowe juggled the silver screen and a six-string for 13 years, finding time to release three albums in between the filming of Gladiator, A Beautiful Mind, and Master and Commander: The Far Side of the World. But with the straight, guitar-driven ‘Gaslight’ (1998), ‘Bastard Life or Clarity’ (2001) and ‘Other Ways of Speaking’ (2003) doing little to affect, impress or overly insult, and the band’s curiously watchable music videos being more of a legacy, TOFOG’s mid-tempo mediocrity eventually pushed Crowe to “evolve” into ‘The Ordinary Fear of God’ in 2005.

Crowe wasn’t finished. A compilation release and a brief musical hiatus later, ‘The Crowe/Doyle Songbook Vol III’ emerged in 2011; complete with acoustic demos and, erm, the vocals of ex-wife, Danielle Spencer. Oh yeah, and there’s a reason you’ve never heard of any of these projects.