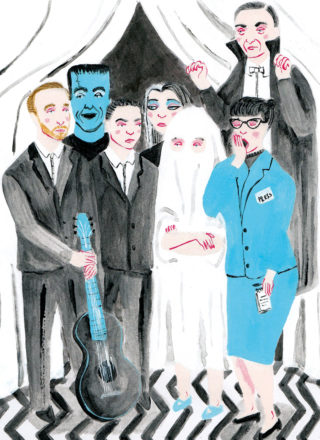 Each month Reef Younis explores the truth behind whether movie stars can ever really be in good bands.

Ryan Gosling is a man with life perpetually wrapped around his little finger. He has the looks, the Hollywood career, the beautiful girlfriend and family, the indie cinema kudos, the well-meaning Internet memes and yes, inevitably, he can play guitar.

On-screen, we saw him strum a little ukulele ditty in Blue Valentine but away from those twee cinematic flashes, Gosling takes his music seriously. Back in 2005, the former Disney Mouseketeer met Zach Shields in the kind of scenario Perez Hilton has made a career out of. With Gosling dating his then co-star, Rachel McAdams, and Shields involved with her sister, the pair found odd common ground in a shared affinity for haunted houses and Dead Man’s Bones was born. After all, what could go wrong for a project envisioned by an Oscar-nominated actor and his girlfriend’s sister’s boyfriend using instruments they didn’t yet know how to play to write songs about ghosts, ghouls and monsters?

After deciding to play every instrument themselves, avoid click tracks and electric guitars and try to record every song in no more than three takes, their first official track, ‘In the Room Where You Sleep’, made its way into the world on Christmas Day (c’mon, Ryan!) 2008.

Two years in the making, and with shades of Arcade Fire, Bryan Ferry and Tom Waits, Pitchfork called the album “unique, catchy and lovably weird” but the more curmudgeonly Spin – seemingly determined to ignore most of the background – believed that Dead Man’s Shoes weren’t about to “reverse the rule that actors make dubious pop musicians.”

Regardless, Gosling stepped up on bass, piano, cello and vocals, Shields learned drums, and Dead Man’s Shoes stayed true to their initial concept of a monster-themed musical by replacing a traditional support band with a talent show, performing with dancing neon skeletons and glowing ghosts, and playing with a local choir for thirteen gigs on a brilliantly inevitable Halloween tour. Dead Man’s Bones was a horror show; it just wasn’t the one it should have been.