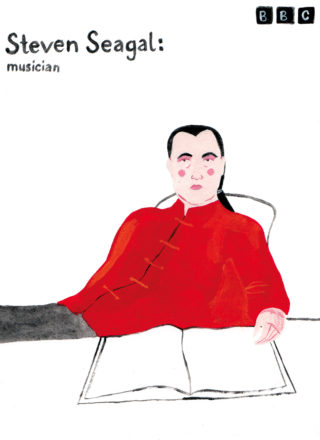 Anyone can play guitar, even 1990s action heros

Despite the tough guy exterior; the goatee, the ponytail and the sizeable, leather-clad presence of a Mafia capo, Steven Seagal wants you to believe he’s an artisan. “Any great warrior is also a scholar, and a poet, and an artist,” he said, before ceaselessly trying to become everything he’d listed out. His filmography might read like an 80s hair metal tribute set (‘Belly of the Best’, ‘Above the Law’, ‘Born to Raise Hell’ etc.) but when the direct-to-video king wasn’t putting his name to energy drinks (Steven Seagal’s Lightning Bolt), signature long range rifles (‘Orsis by Steven Seagal’), or starring in ‘Steven Seagal: Lawman’ – a reality TV show made possible through his ceremonial Reserve Deputy Chief title in Louisiana – he was also trying to add ‘musician’ to an increasingly confusing resume.

Ostensibly, there comes a point in every man’s life where, after sending a circus of movie villains to their death with coup d’états like “I’m gonna take you to the bank, Senator Trent – to the blood bank,” you can only find solace in song. “I’ve been a musician since childhood, and music is my first love,” he said. And so, with the two albums under his 7th-dan Aikido black belt – the awful ‘Songs from the Crystal Cave’ and passable ‘Mojo Priest’ – Seagal lived out his Guitar Hero ambition.

Replete with album covers direct from David Brent’s imagination – Steven Seagal: Musician sat on a front porch, staring into the distance, cradling a guitar like it was his last grenade in a terrorist siege – the least you could have hoped for from this Seagal iteration was more range and emotion than Steven Seagal: Actor.

But dressed up with a host of reggae, new world and Satriani-light distractions, no amount of bells and whistles could disguise the fact that ‘Songs from the Crystal Cave’ was like listening to a night of passionless karaoke. Sober.

True to his silver screen persona, Seagal’s economical relationship with words extends into his music with a lyrical simplicity – monosyllabic titles like ‘War’, ‘Strut’ and the painfully literal ‘Music’ verging on the guttural excitement of an Aikido throw.

Still, I can see Steven Seagal: Musician now, caressing his guitar in a warm, dojo glow, emanating a zen-like smugness, his ponytail fluttering as he croons his way through ‘Girl It’s Alright’ while his guitar gently weeps; the excitement as he pens the rudimentary lesson in spiritual morality that is ‘My God’; the Gallagher-esque tendency to rhyme ‘sky’ with ‘cry’ at every opportunity.

Surprisingly, though, where ‘Songs from the Crystal Cave’ went drastically wrong, ‘Mojo Priest’ at least had Steven Seagal: Musician going back to basics with a theatric take on old town blues that wouldn’t be out of place in a backroom bar set. Turns out, Seagal can play guitar – enough to add ‘musician’ to that warrior list of his.