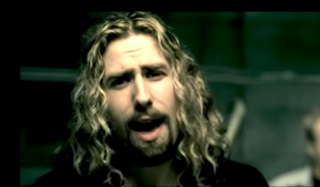 This is Video Nasties, a new monthly column by Andrew Anderson - starting with the coolest guys in rock!

Video Nasties is a look at the evolution of musicians through the egotistical medium that is the music video. First up, I’m taking the good ship Loud And Quiet for a trawl through the history of Nickelback’s, dredging up their bottom dwellers and dissecting them on deck in an attempt to discover just who they are, how they see themselves, and what it all means for us living alongside them on planet earth.

Founded in 1995, Nickelback are four Canadians who make very popular music. Chad Kroeger, a denim-dressed everyman for the empty, is their leader. In 2001 their first big hit ‘How You Remind Me’ sold approximately four trillion copies and is the most played song of all time (probably). Since then they’ve plopped out another half dozen albums and become an integral and oft-mocked part of popular culture.

Clear your mind. Now think of the word ‘Nickelback’. What do you see? If you’re like me it is probably an image of Chad Kroeger (Choader to his friends) in a dark room taking big strums on a guitar while  shaking his dime-store-Jesus hairdo. In other words, it’s a scene from the music video for ‘How You Remind Me’. Directed by the Brothers Strause, ‘How You Remind’ sets the rules that all subsequent Nickelback videos follow:

Rule #1: The band must play with constipated expressions on their faces.
Rule #2: The visual metaphors must be as obvious as those in Kroeger’s lyrics.
Rule #3: Chad must be at the centre of the plot (if there is a plot).
Rule #4: The audience watching them play must be surprisingly sparse.

Here’s what I reckon the directors pitched to the band: “Chad looks sad in a bathroom because his girlfriend has left him. He sees her in his house, in the street, and then at a concert he is playing, but she keeps dissolving before his eyes. Every time that happens all the colours go blue because he’s sad. Then you guys play the song using your best big strums, constipated expressions and animatronic movements to a crowd of about seven people.”

Four years and two albums later along came ‘Photograph’, their biggest selling single since ‘How You Remind Me’. This one has a special place in my perception of Nickelback, because it is the first time I was truly shocked by their blatant lack of talent.

It begins with Chad holding up a photograph – in fact, the one he is describing in the lyrics. “Look at this photograph… every time I do it makes me laugh,” he says – although he doesn’t laugh. Instead, he pulls a face as if to say ‘ah, those were the days’. Chad can’t act.

The band then rocks out with obligatory big strums in Kroeger’s old school in front of no one because, as he growls in the lyrics, “This is where I went to school, most of the time I had better things to do”. Finally, they run around in long grass and drive pickup trucks – items taken from the semantic field of ‘wistful’. It follows all four of the Nickelback music video rules, and therefore must be considered a success.

But what would happen if Nickelback took a risk? Well, it would probably look something like ‘She Keeps Me Up’.

One thing that has always impressed me about Nickelback is their ability to expand the outer limits of awful.
There’s an old expression that goes “you can’t polish a turd, but you can roll it in glitter.” Well, that’s exactly what director Nigel Dick (who has directed 14 Nickelback music videos in total) did with this one. Featuring mirror-ball guitars, shiny thin-lapelled suits that look like they were stolen directly from the shelves of Burton, and some truly atrocious dance moves, the video for ‘She Keeps Me Up’ looks like a nightclub as imagined by someone who has A) never been to a nightclub and B) never had any fun.

“We tried to get a little funky” said Chad’s brother and Nickelback bassist Mike Kroeger, explaining the song’s origins. Obviously, Nickelback are about as funky as a band made up of George Osborne on bass, John McCririck on drums and Ed Sheeran on everything else. To that end, this video succeeds: never mind a little funkiness, it conveys a total lack of any at all.

Nickelback’s videos have shown me that they are risk-averse people who make something sweet and safe for equally scared people – the musical equivalent of cheap milk chocolate. And that when they do try something a bit different, they expose a staggering lack of imagination. But, for all that, I’m not sure they are bad guys. In a complicated and frightening world, they fulfil a need – namely, for reassuring but ultimately meaningless music.

In the end, we have two options: we can either solve the world’s problems and the fact they really do seem to love this band, or else we must prepare ourselves for more lyrics like “Funky little monkey, she’s a twisted trickster” and “Kim’s the first girl I kissed, I was so nervous that I nearly missed.” The choice is ours.