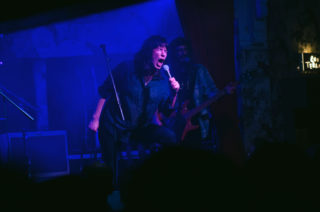 As much as Jen Cloher never expected to be here, she’s hardly allowing herself to get carried away. As she notes towards the end of tonight’s show in Manchester – her second in the city in six months, after last September’s tiny gig at The Eagle Inn across town – the vast majority of Australian musicians never make it out of their country; much less get to tour as much as Cloher has on the back of last year’s bruised and beautiful self-titled album. The breakout success of her wife, Courtney Barnett, who plays guitar in the backing band tonight, has undoubtedly been integral in bringing Cloher to international attention – when she dusts off 2009’s ‘Fear Is Like a Forest’, she acknowledges that it was Barnett’s cover of it with Kurt Vile, on last year’s collaborative ‘Lotta Sea Lice’ LP, that was the first that many people had heard of it, and her.

Her songwriting, though, shines all on its own, and the truth is that tonight’s set feels a lot more playful than the album it leans so heavily on; intensity on record is consistently swapped out for bright and breezy guitar pop, especially on ‘Showgazers’ and ‘Great Australian Bite’. There’s moments that a relayed faithfully, particularly the sprawling set centrepiece ‘Analysis Paralysis’, which unfurls slowly, but for the hour or so that she’s onstage, Cloher rattles through her back catalogue with the sort of purpose you’d expect from somebody who’s been plugging away for over a decade to be here.

The morning after the show, Barnett announces her second LP, which is bound to be as huge as her first. Tonight, though, it’s Cloher front and centre – a very different talent to her wife, but a similarly brilliant one.