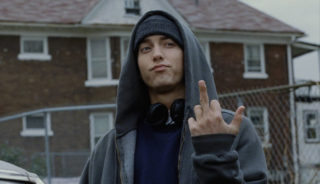 I’m sure most of you have seen 8 Mile before – or at least heard of it. It stars Emimen and came out in 2002 when he was at the pinnacle of his career, having released three commercially successful and critically credible records in the previous four years.

I have also watched this movie before, twice in fact – although I was high both times and have little recollection of either experience (other than leaving halfway through the second viewing to buy chocolate… whereupon I was laughed out of Tesco as I was too stoned to operate the self checkout. Kids: don’t do drugs).

Anyway, what I’m trying to say is that 8 Mile is the first band-based film (or rapper-related movie, if you will) since A Hard Day’s Night to reach a mass audience (This is Spinal Tap doesn’t count, of course). In fact, it was so well known that it received the honour of being extensively parodied in Scary Movie 3 (which, given that it isn’t a scary film, doesn’t make much sense).

So why was it so successful? Well, let’s watch (without being inordinately stoned) and found out.

The first reason is the one I’ve already mentioned: when 8 Mile was released Eminem was very famous, and still making successful records. Of course this doesn’t guarantee your movie will be a success, (Tenacious D in The Pick of Destiny proves this point) but it is a good start.

The second, more profound reason, is that this film is actually good. Here’s why…

8 Mile is good for the same reason Eminem has always been good: because he is honest. He doesn’t rap about gangster life, accruing meaningless wealth or any of the other inane things most mainstream rap songs are concerned with. Instead, he raps about what he sees with his eyes and what goes on his head. Now that can mean hearing about a rather violent worldview, but it can also mean funny and touching moments too. This film, like his music, is low on the bullshit.

Eminem plays Jimmy Smith (aka B-Rabbit), a wannabe white rapper from Detroit. He’s struggling with a crappy job (in a car factory), a crappy girlfriend (who pretends to be pregnant) and an even crappier mum (who insists on shagging his former school mates). Furthermore, he messes up his first big chance in a rap battle when he chokes under pressure. It’s not easy being B-Rabbit, but what he does have going for him is a good group of friends. They support his talent, in spite of his fuck ups, and seem to – dare I say it – love him. They help B-Rabbit overcome his self-doubt and, eventually, he returns to the scene of his spiritual depantsing to prove that he is a great rapper after all. Hooray!

Unlike other rap movies – Get Rich or Die Tryin’, for example – 8 Mile doesn’t glorify Emimen’s crappy past. We see Detroit for what it truly is: a failed city, full of abandoned houses and burnt out cars. There’s something poignant about the fact that in Motor City, once the heart of the American auto industry, all the cars have broken down. It’s a metaphor, innit?

Another un-rap-like moment comes when Eminem’s pal Cheddar Bob pulls out a gun during a fight. Now, normally rappers are supposed to think guns are cool, but in 8 Mile everyone shits themselves with fear just like real people would. Bob – who is quite extraordinarily inept – then manages to shoot himself in the leg while putting the gun away. What other rap film would deliberately show people being this uncool? None that I know of.

But the real highlight is the climatic final scene where Eminem takes on reigning champion Papa Doc in a rap battle. Rather than insulting his opponent, Eminem instead insults himself: he knows who he is, and isn’t ashamed of it. As far as fist-pumping Rocky-style moments go it’s a good one. It makes you think two things:

1) This is great! Why can’t more hip-hop be like this?

Where the film fails is in its portrayal of women, which you probably expected if you have ever given Eminem’s lyrics a listen. His romantic foil Alex (played by Brittany Murphy) wanders around being manipulated by men, and it is never really explained why she is so attracted to Bunny Rabbit – it is just sort of assumed that she is. The women in the film are powerless, and at the mercy of men who don’t seem to care much about them. Add to that a bunch of other misogynistic and homophobic moments and suddenly this film isn’t quite as good as it could have been. Yes, on the one hand it is honest – rap culture is often homophobic and misogynistic – but does that excuse Eminem? Nope, ‘fraid not.

So how can I still say it is good? Because I think its depictions of life in Detroit are true to life, and insightful in a way other band movies simply aren’t. Like I said, Eminem might be a lot of things – a homophobe, a misogynist and a man obsessed with violence – but as I say, he is honest. When we are surrounded by a celebrity culture where everyone has to pretend to be something they are not it feels refreshing. That’s why people relate to him, and that’s why this film works.