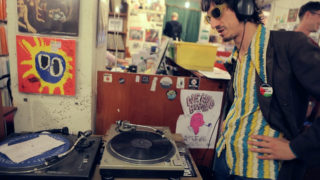 He's indecisive, wishes he had a bigger nose and reckons there's a lot of overrated music out there - but, damn, he makes a mean spag bol

They are but different degrees of the same man – Lias Saoudi in Fat White Family and Johnny Rocket in one-time-fictional glam band The Moonlandingz, who release their debut album, ‘Interplanetary Class Classics’, in March. One or both of them took our GTKY questionnaire.

The best piece of advice you’ve been given
Make up your mind.

Your pet-hate
I suffer from severe misophonia [the hatred of sound].

If you could only eat one food forever, it would be…
Spaghetti Bolognese I’ve cooked myself.

The worst job you’ve had
I’ve had a lot of shitty jobs. It’s a toss up between meat packer at an abattoir in Northern Ireland and invigilator at the National Maritime museum in Greenwich, where they have an entire room dedicated to the history of clocks.

The film you can quote the most of
Withnail and I.

Favourite place in the world
Maillot in the mountains of Kabyle, Algeria. It’s where my dad’s side of the family are from. I haven’t been back there for a long while but it was probably where I felt least frustrated, self obsessed and debilitated by an excruciating sense of competition with everybody else that seems to be the MO of western living.

The one song you wished you’d written
‘The Future’ by Leonard Cohen.

The most famous person you’ve met
Yoko Ono. I met her at her house in upstate New York just before starting a session there with Insecure Men. I’d heard she can turn on folks unexpectedly, but I found the opposite to be the case – she was very friendly, wanted to chat all night.

The thing you’d rescue from a burning building
I don’t own anything so probably someone else’s record collection.

The worst date you’ve been on
Hard to choose. I have a desperate habit of going out with people I barely know that I’ve either encountered while shit faced or met online. So many bitterly awkward moments.

Your first big extravagance
Paying for my big brother to stay in a 4 star resort for five days in Cambodia last Autumn. It was something I told him I’d do while I was pilled and later came to bitterly regret.

The characteristic you most like about yourself
It doesn’t matter how depressed or useless I feel I can always comfortably bury my head in a book.

Your hidden talent
The flip side of being tragically indecisive is that I’m quite diplomatic. I think.

Your favourite item of clothing
I’m possibly the least fashionable person I know. I usually own one set of clothes at a time. Fat Whites sax man Alex White leant me an incredible shirt the day we played Brixton Academy – a zip up disco number with collars that look like they have elephantiasis. I still haven’t given it back, so…

Your biggest disappointment
Not being given 100k from Ryanair for ‘Whitest Boy On The Beach’.

The celebrity that pisses you off the most even though you’ve never met them
FKA Twigs. “Believe in more”? Nike? Are you fucking kidding me?

Your biggest fear
That I’m not actually capable of love.

The best book in the world
East of Eden/Grapes of Wrath by Steinbeck, or Dubliners by James Joyce, or The Stranger by Camus, or The Thief’s Journal by Jean Genet, possibly Lolita by Nabokov. Although I just read Hangover Square by Patrick Hamilton and it properly knocked me out.

People’s biggest misconception about yourself
That I have any idea I know what I’m doing whatsoever.

Who would play you in a film of your life?
Gerard Depardieu.

What is success to you?
Not being terrified of the future beyond the next 6 months.

What talent do you wish you had?
I wish I were a more competent musician.

If you could choose how you die, what would it be?
I’d probably take 50 Valium and just start swimming.

What is the most overrated thing in the world?
The 1975. Savages. Slaves. I could be here all night…

What, if anything, would you change about your physical appearance?
I’d have a slightly larger nose.

What’s your biggest turn-off?
I’m off sex at the moment; the whole thing weirds me out these days.

What would you tell your 15-year-old self?
Don’t go to art school.