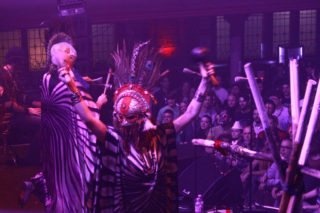 The mysterious Swedes were joined by Hookworms, Jane Weaver, Mugstar and Josefin Öhrn and the Liberation for this celebration of psychedelia.

Fellow Swedes and label mates to Goat, Josefin Öhrn and the Liberation open a line-up that is a deep-set exploration of contemporary psychedelic music. The textural atmospherics and undercurrent of electronics from their recent album ‘Mirage’ are overwritten somewhat in favour of volume-pushing guitars that create a dense fog for Öhrn’s vocals to float around in a hazy but absorbing vacuum, setting a tone for an evening that leans heavily towards the hypnotic.

Liverpool’s Mugstar, playing as a three-piece instead of their usual four, unleash a Mogwai meets Sabbath fury of guitars, thunderous bass and an unrelenting pounding of drums and fizzing snares, creating a shifting presence that moves from bubbling and immersive introspection to explosive and hurtling space-rock, taking one to the moon and back in a matter of minutes. Jane Weaver manages to lock into a deeply magnetic yet pop-drenched groove from the off and she and her band remain there throughout the rest of their set, ending in the propulsive tick of ‘I Need a Connection’ which allows Weaver’s vocals to float endlessly atop of humming keys and a fizzling drive of German-tinged electronics. 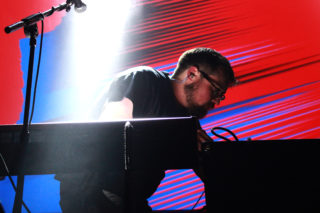 Hookworms play their first show in some time and new material, with an expanded set-up, comes with them as they notably introduce more electronics into their sound. It’s these electronic components that immediately define the band’s opening notes as they start with a new song that builds in a sparkling fury of hissing electronics before bursting to life with the aid of rocketing drums and a burrowing keyboard melody before the inevitable echo-laden cries of singer MJ comes to life and the song charges further forward with both intensity and an enveloping construction.

It’s one of two new songs – both of which feel immersive and expansive – which sit suitably alongside older material such as ‘Radio Tokyo’ and ‘Retreat’ to create a set that zooms with white-knuckle force whilst still feeling like new developments are being put into place to further explore the atmospherics and textures surrounding the hurtling core of their live set.

At the moment the electronics don’t feel entirely integrated into the set, more like elements that float around the edges or build bridges to connect the songs, like they are guests hovering in the background waiting to be let in. As a result, this feels like the stages of a band in transition, in the thick mist of experimentation in which they still don’t know exactly where they are taking this material (or its taking them) and it’s an exhilarating stage to witness taking place.

Goat‘s recent album, ‘Requiem’, operates in more of a meditative and acoustic setting than previous work, a record that feels deeply hypnotic and elemental and ultimately less concerned with some of the more common traits and sonic ticks of modern music deemed “psychedelic”. However, on stage it’s the larger than life Goat that appear: monstrous electric guitar riffs, firecracker percussion and dancing that at times borders on the rabid as the dual singers shriek in almost ritualistic unison. 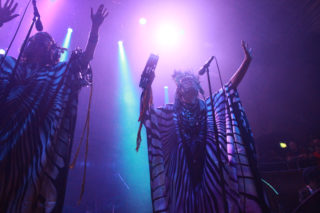 Aside from being able to erupt in explosive bursts and grooves with seamlessness, Goat have a remarkable ability to stretch out a piece of music to lengths the would feel stagnant and tired in the hands of many but the energy and intensity of tracks like ‘Run to Your Mama’ unfurl and unravel in gloriously entrancing rhythms, allowing one to become not merely locked but cemented into the movement and developments of the song as it stretches out in expansive waves.

Their extended encore pushes their set to a time not too far away from two hours and they still feel as invigorating and animated as when they stepped out onto the stage. There was always a worry that a feeling of the novelty would be applied and potentially presented by Goat as time moved on but four years on from their debut release, they posses a musical naturalness that still proves to be an unshakable force.