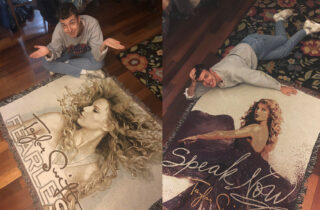 Growing up as a gay teenager in Ireland's North West, Taylor Swift's music meant a lot to Gary Grimes. Following the death of his father, he's found new meaning in the lyrics he once only hoped he would one day understand

After dabbling in the world of illegal downloading, conquering .zip files but being well and truly thwarted by the seeders and leeches of torrenting, Fearless by Taylor Swift was the first album I ever purchased on iTunes. It was an act of christening for the lime green iPod Nano I got from my parents for my 13th birthday in September 2008, which was also the month I began secondary school.

Last Friday saw the release of Fearless (Taylor’s Version), a 2021 rerecording of the Grammy-winning album that has been produced to sound as close to identical to the original recording as technology and the singer’s now matured, refined voice will allow. The release comes as an act of defence by Swift following the sale of the master recordings of her first six albums to industry heavyweight Scooter Braun, a man that Swift says has bullied and intimidated her over the course of her career.

In a bid to devalue the asset (which Braun has since sold at a nine-figure profit), Swift has declared she will rerecord all of her first six albums, song by song, line by line, recreating every breath, inflection and quiver in her voice so as to produce a near carbon copy for her fans to enjoy without having to compromise their morals.

It’s been a cathartic experience for me, and I know countless other proud and devout Taylor Swift fans who have spent this week listening to the album for the ‘first’ time all over again. I’ve been hearing the same songs that were imprinted on my 13-year-old mind through the ears of my 25-year-old self, this time finding new meaning and relatability in lyrics that I so vividly remember singing along to the first time around, consciously and desperately hoping I would one day have lived a life so full of experience that it would allow me to sing these songs with some conviction.

As a 13-year-old gay boy in the North West of Ireland, who truly nothing had happened to, even the song ‘Fifteen’ was a stretch for me to find parallels in. I was very much looking forward to crossing the threshold into my fifteenth year — and boy did I mark the occasion (see photographic evidence below) – though I took a little comfort in the fact that I was, at least, thirteen (famously Taylor’s lucky number).

Fast forward through a decade of stadium tours, mild-to-severe trauma and somewhat narcissistic self-analysis, for Taylor and me both. When I look back now, we’ve been through a lot together since we rang in my 15th birthday. Upon embarking on a year long stay in NYC in 2017, it was Taylor who greeted me upon landing at JFK airport to the tune of ‘Welcome To New York’, the opening track of her 2014 pop opus 1989. Following that, she helped me romanticise ‘nights in Brixton’ and ‘Shoreditch in the afternoon’ as I settled into my new London life to the hum of 2019’s ‘London Boy’.

More recently she offered an escape from the mundanity and misery of life in lockdown through the tapestry of woodland scenes and characters she created for her critically-lauded folklore album. The record’s sister album evermore included ‘marjorie’, a song that talks so poignantly and delicately about the subject of grief that it allowed me to unlock a pocket of emotion I had been suppressing through what has been the most challenging and eventful year of my life so far. A year that left me wishing I could revert to being a 13-year-old boy who truly nothing had happened to.

On Friday, whilst quarantining in my teenage bedroom in advance of the one-year anniversary of my father’s suicide, it struck me how I couldn’t imagine a better way to experience my first listen of Fearless (Taylor’s Version) than by hearing to it once again in this room adorned with family photos and Twilight posters, perfectly preserved like a museum exhibition on my younger self. A bedroom designed with love by my father, in partnership with a ten-year-old me, purpose built for me to be precisely the sort of teenager who would spend hours, days, months and years holed up in that very bedroom, discovering the original album (and many, many other things…).

“I’ve found time can heal most anything, and you just might find who you’re supposed to be. I didn’t know who I was supposed to be at fifteen.” — Taylor Swift (‘Fifteen‘)

Twelve years have passed since I first pressed play on Fearless (hence forth known as ‘Scooter’s Version’?) and, in fairness, I do feel I’ve done quite a bit in those years. I’ve learned a lot, and I too have found time can heal almost anything. But somehow, try as I might to have avoided it — and I really did try — I’ve wound up right back exactly where I began.

360 days have passed since my father said goodbye, without saying goodbye. After nearly a year of agonising, questioning, theorising and coming to absolutely zero conclusions, I’m sitting here in this bedroom with ‘White Horse’ playing and honestly, I can’t remember the last time I felt so connected to him or, more importantly, to me and him. To us.

And so I think perhaps here I’ll stay, in some way, forever and always.