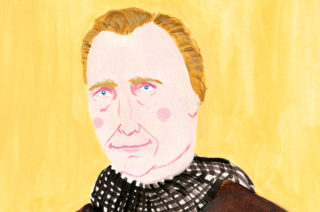 When he wasn't turning his van into a dog...

To many of us, Jeff Daniels will forever be an idiot. He was the dunce who spent his life savings turning his van into a dog, shit his soul into a toilet bowl, and turned down the chance to oil up a women’s volleyball team. But away from his role as Harry Dunne in the classic film Dumb & Dumber – and turns in the brilliant Good Night, and Good Luck, indie hit The Squid and the Whale, and Hollywood blockbuster, The Martian – Daniels takes his music seriously. Sort of.

Jeffdaniels.com introduces you to the music man with a typically elaborate introduction to the sounds within. “Welcome to the musical side of myself,” it coaxes, “Through this little portal into the digital universe and with a singular focus on the songs that continue to pour out of my pores, take my hand as I valiantly meander my way towards something yet to be defined and, more than likely, never will be.” Deep.

When he’s not acting, writing plays or involved with his non-profit Purple Rose Theatre Company, Jeff Daniels, it turns out, has his guitar in his lap and a Western twang on his tongue. With four full-length records and two live albums released over the last 12 years, Daniels’ folk and comedy-inspired tracks have the accomplished appeal of a country fete headliner or a free CD with a Sunday supplement.

Part singer, part stand-up, he walks a delicate line between semi-serious lyricism, comic timing and unexpectedly solid musical ability. “I’m not the first celebrity who thinks he can sing and get away with it,” he admits on ‘Jeff Daniels Live and Unplugged to Benefit the Purple Rose Theatre’ before picking his way into the tongue-in-cheek wit of ‘If William Shatner Can, I Can Too’ and ‘You Can Drink An Ugly Girl Pretty’.

Elsewhere, monologues about lyrical inspiration shift from Harley-riding preachers (‘Wicked World’) and production assistants ‘The Newsroom’) to that time he played the villain in Clint Eastwood’s ‘Blood Work’ (‘The Dirty Harry Blues’).

Daniels’ amiable takes on blues, folk and bluegrass might feel like a fishing weekend with dad – him pulling out a battered acoustic after a few beers and riffing on Bobby Day’s ‘Rockin’ Robin’ to some campfire jokes he’d never say in front of mum – but in a world where Jennifer Love-Hewitt can release four albums, it’s cold comfort knowing that he can at least play guitar in his musical punch line.