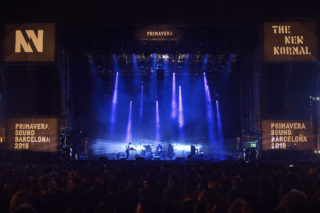 Primavera Sound mix it up with their curtain-raisers. While the full programme doesn’t get going until Thursday evening, the run-up is scattered with shows across Barcelona, including this appetiser – a free night of music on the main Parc del Forum site, and a thanks of sorts to the locals for putting up with the tens of thousands of revellers descending on their city. In the past, that’s meant prelude performances from the likes of Albert Hammond Jr., Belle & Sebastian and, last year, Spiritualized. Tonight, it’s a similarly woozy entrance to the weekend with a rare appearance from Justin Vernon (Bon Iver) and Aaron Dessner’s (The National) project Big Red Machine.

It’s not just the duo on stage, but a handful of interchanging guests including Aaron’s twin brother Bryce Dessner on guitar, and vocals from Julien Baker (ingratiating herself by wearing a Barcelona FC shirt).

And, frankly, given they haven’t performed an enormous amount of shows as BRM, the pair, facing each other behind laptops (Aaron’s with a DIY sticker saying ‘BRM’ – a reminder not to accidentally take the ‘TN’ laptop, perhaps?) seem very relaxed. Maybe it’s the familiar surroundings, given both have headlined Primavera Sound in the past. Vernon is so chill he fires up a cigarette and swigs from a succession of beers mid-set. “It’s nice to be in a place and play new ideas and feel like you all are with us,” says Aaron Dessner towards the end. 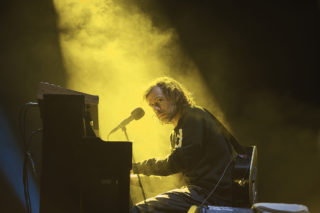 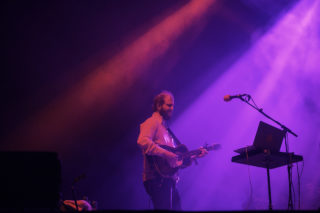 Last year’s self-titled Big Red Machine album was released with little fuss, but its highlights are performed ably here. That means outings for opener ‘Gratitude’, ‘Lyla’ and ‘Deep Green’. A strobe-light assisted ‘Air Stryp’ raises the tempo most. Much of the rest of the set is interspersed with new material, or “ideas not songs” says Dessner, correcting himself. And he’s truthful, some of the extended jams do come across like works-in-progress. However, one track, possibly titled ‘Reese’, performed towards the end is fully-formed, soaring and sublime, the best moment of their 75-minute spell on stage.

No songs from the Bon Iver or National catalogues are thrown in for the chatty crowd, but that’s in keeping with the ethos of the 37d03d collective that Vernon and Dessner front. As they do at their own festivals, they’d rather create unique moments than idly run through the hits. They certainly seem satisfied, with Vernon ruffling his bandmates’ hair as they walk off stage with hugs and smiles.

There will be bigger stories, bigger themes to emerge from Primavera Sound 2019 – not least the 50/50 gender split in the line-up – but, for now, as a unique and mellow precursor, it’ll do just fine.