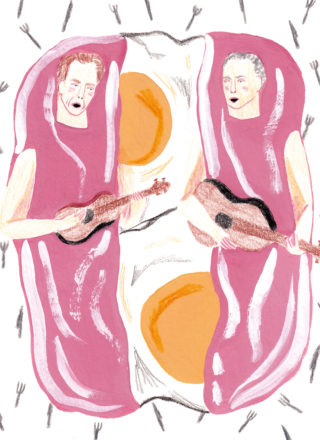 When he's not flogging you EE broadband, Kevin and his brother make sweet, sweet Americana... and Egg songs

Kevin Bacon’s been many things in a long and storied acting career: a restless young dancer in Footloose, a child molester in The Woodsman, a man in an eternal, straight-to-DVD battle with giant cannibal worms in Tremors and the guy who’s spent most of the last decade peddling shit 4G for EE.

Let’s not forget, though, that Bacon has also made a brilliant supporting habit in understated classics like JFK, Frost/Nixon, A Few Good Men and Sleepers; that got his star on the Hollywood Walk of Fame; and, in 2015, became the face of the US egg industry – and a lifetime of breakfast-based puns. Still, even with that star on Hollywood Blvd, Bacon’s varied acting career has come to be defined by the Bacon Index – a mathematical formalisation of other actor’s proximity to him based on the annexed ‘Six Degrees of Kevin Bacon’ meme.

On the silver screen, then, he might forever be considered the ultimate supporting actor but that all changes when it comes to The Bacon Brothers. Here, behind the recording studio microphone, there’s no more playing second fiddle (well, guitar) to the Wahlbergs, Costners and Pitts of this world.

The Bacon Brothers (the other one’s called Michael, who’s older, with music as his day job) are as many studio albums into their career as there are degrees of separation between, Kevin and, say, Rowan Atkinson. In order, they are: ‘Forosco’ (1997), ‘Getting There’ (1999), ‘Can’t Complain’ (2001), ‘White Knuckles’ (2005), ‘New Year’s Day’ (2009) and ‘36 Cents’ (2014) – all healthy slices of country rock folk and Americana that might not have enjoyed the commercial success of other ‘Anyone Can Play Guitar’ alumni, but, then, none of them played in Daryl Hall’s (of Hall & Oates) house or got to write songs about eggs in a series of curiously painful adverts where a three chord chorus of ‘E G G S / E G G S / E G G S / Eggs!’ will earworm its way into, and ruin, every fry up you will ever eat from now on.

It’s in the former, round Daryl’s, where Kevin, sat on a stool and surrounded by his bandmates, proves that he has a solid set of pipes on him. It’s also pretty cute how made up he is to be playing when his guitar (one of about 400) comes in on Hall & Oates’ ‘When The Morning Comes’ – you can YouTube it. It’s not enough to make me rush out and buy an album (not even ‘White Knuckles’) but it does help make this side of Bacon surprisingly satisfying.

Here are some more actors making music, to varying degrees of success