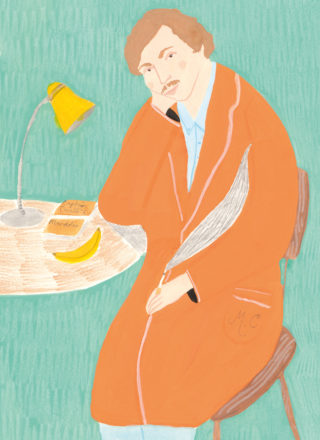 Sometime after he poked the Pillsbury Doughboy in the stomach and became synonymous with the painfully reserved George Michael Bluth in Arrested Development, but shortly before he became perennially confused with Jesse Eisenberg, Michael Cera was already proving he could do more than just play guitar – he could play the mandolin, instead.

It was those lute skills and a lifelong love of Weezer (Cera’s favourite album of all time is ‘Pinkerton’), that saw him feature alongside Rivers Cuomo and band on ‘Hang On’, become the touring bassist for sort-of indie rock supergroup Mister Heavenly, and form The Long Goodbye with fellow actor Clark Duke (of Kick-Ass fame – the guy who played best friend Marty).

With The Long Goodbye’s basic structures and lo-fi sound a tidy reminder of the naivety, humour and tenderness that made The Moldy Peaches so inexplicably likeable, and the band’s defunct-looking Myspace page yielding little (a cursory Youtube search for ‘Can I Call You Mine?’ provides all you need to know) you’d think Cera’s musical endeavours ended there. They didn’t.

His bass and backing vocals made it onto the silver screen on the soundtrack to Scott Pilgrim vs. the World (a film he played the lead in in 2010), following a cover of the aforementioned Moldy Peaches track ‘Anyone Else But You’ in Juno – Cera and Ellen Page twanging their acoustics in a twee duet – and then, finally, his full-length debut album ‘True That’ arrived in 2014.

Featuring 21 tracks (only two were covers), Cera channelled his inner Elliot Smith to create a 50-minute collection of instrumentals and melancholic ballads that chimed and charmed in the similarly honest, bashful way most of his characters get cast. There’re songs about girls (the detuned whistle and twang of ‘ohNadine (you were in my dream)’ and the soft lament of ‘Ruth’), melodic little ditties (‘What Gives (…I can’t live like this)’), loose piano interludes (‘Of A Thursday’ and ‘Gershy’s Kiss’) and the slightly warped California sound of ‘Steady Now’, all which lend the album a pleasantly haphazard, carefree spirit that neither compels nor offends. In other words, ‘True That’ was as on brand as Greg Wallace releasing an album about puddings and an annoying friend who eats with his mouth open. It’s essentially the solo album you’d expect Michael Cera to create: curious, creative and cultured – less Superbad and actually sort of good.