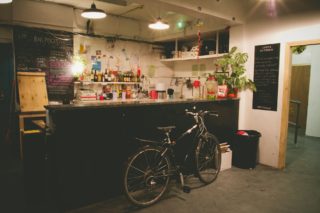 Grassroots spaces are in trouble, but there are things we can do

On Friday (12 June), the cooperative team behind DIY Space For London announced that due to financial pressures exacerbated by the Coronavirus pandemic, the South Bermondsey venue will be closing its doors – in its current form, at least.

The industrial unit on Ormside Street was opened up as an arts space and community centre in 2015, following a fundraising campaign and volunteer drive. Although it was hardly without precedent – indeed, it shared founding members and volunteers with similar spaces like New River Studios in Manor House, DIG in Lewisham and Power Lunches in Dalston – it quickly became a focal point for London’s radical underground, functioning not only as a music venue, but also as an organising space, record shop, café, community arts centre, and more.

I first volunteered at DIY Space in autumn 2015, not long after the venue opened. Personal and work commitments got in the way of my being involved in the space itself beyond irregular volunteer shifts, but through promoting shows, played in bands, attending gigs and taking part in workshops at the venue, I became pretty familiar with it very quickly. I’ve written about my love of the place at length before, so I’ll try not to re-tread old ground, but the importance of these vanishingly few community venues cannot be overstated. Not only are they the lifeblood of the new music scenes that Loud And Quiet seeks to champion, they also perform a profound social function that’s become increasingly difficult to find in recent years.

At DIY Space and venues like it, you can just be. There’s an explicit commitment – literally plastered on the walls – to respecting those around you, for understanding their boundaries, for holding yourself accountable to the rest of the community. There’s no pressure to spend any money – even if you’re attending a ticketed show, many of those are run on a pay-what-you-can basis, a practice that is encouraged by the sliding scale and accessibility policies which inform the venue’s hire fees. The fact that this is remarkable – a place one can spend time in for free, without fear of judgement, harassment or worse – speaks volumes about the lack of truly public space in this country, and the state of that which remains. Furthermore, it’s important to underline that as pleasant and utopian as these kinds of spaces feel to me – cis, white, male, non-disabled – for more marginalised people, they’re rare places of respite.

Obviously, the ongoing pandemic was a final blow to the Ormside Street venue that couldn’t have been reasonably foreseen, but this has been coming. Prohibitive business rates, dwindling arts funding and lightning-fast gentrification have made underground culture decreasingly viable in a city like London, and DIY Space is but one casualty among many. Even within a couple of miles of its South Bermondsey locale, venues like Deptford’s Sister Midnight Records and Brixton’s Windmill have long had to operate on a shoestring, a precarious situation which forced them to seek public financial support almost as soon as the current crisis hit. This is not a sustainable situation – and, importantly, nor was it prior to the onset of Coronavirus.

One ray of hope: the DIY Space team have vowed to continue, and are now on the hunt for a new venue in which to restart and continue their vital work. To do so, they’ll need more volunteers, not to mention a new space. To get involved, email volunteer@diyspaceforlondon.org, and read their full statement here.