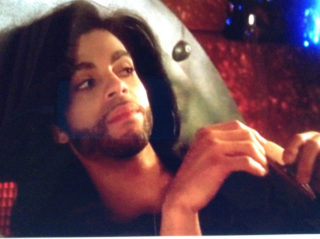 Prince might have passed on to that big sex palace in the sky but he remains the reigning sultan of pop testosterone. Not only is his music awash with more spunk than the seas around a sperm whale during mating season, he also made some ballsy career moves while he was with us. Take his first feature film Purple Rain. Now, if you or I were a musician with just a couple of hits behind us and zero acting experience we probably wouldn’t make it a condition of our new record contract that we get to star in our own film. But that’s what the little man with the big…uh, talent…did.

In spite of its obvious flaws (Prince can’t act and the plot is stupid), Purple Rain was a huge success. That was partly because of the soundtrack, which includes songs like ‘When Doves Cry’, ‘Let’s Go Crazy’ and of course ‘Purple Rain’, but also because it was very much in tune with the times – the film screams 1980s.

After Purple Rain Prince kept making films with diminishing returns. First came Under The Cherry Moon (1986), which isn’t very good (Prince directs, no one watched it). Then a concert film Sign o’ The Times (Prince on stage, no one watched it). Warner Bros were clearly unable to spot the pattern, because even after two flops they still allowed Prince to make a fourth film. Titled Graffiti Bridge, this one would pick up the story where Purple Rain left off. What could go wrong?

Worryingly, Prince was allowed to come up with the concept and write the script himself. There’s no denying Prince’s musical talent, but as every archive TV interview with him shows he wasn’t exactly in sync with reality: this was a man living in a self-built bubble of odd dimensions and epic proportions. As a result, we get a film that feels as though it was written by someone that only has a passing acquaintance with human behaviours, motivations and speech patterns (that description makes Graffiti Bridge sound more interesting than it is).

But at least we can look forward to lots of sexy bits, right? I’m afraid not. This film was released in 1990, several years after Prince’s infamous ‘Black Album’ melt down which saw him “find God”. He explained his position in an interview with Rolling Stone: ‘When I talk about God I don’t mean some dude in a cape and beard coming down to Earth.’ So, that’s that cleared up.

The outcome was that Prince decided to stop being so damn sexy in order to avoid damnation. In the press for Graffiti Bridge he described the film as ‘not violent’ and added that ‘nobody gets laid’, which is rather like making a Harry Potter film without the wizardry or a Christian Bale vehicle without painful overacting. Let’s face it: the violence and the sex were pretty much all Purple Rain had going for it (aside from the badass tunes, of course).

Let me sum up Graffiti Bridge so far: no sex (the one thing Prince is good at), no violence (the one thing that would have made it interesting), a Prince-penned script (which is bound to be terrible) and the whole thing is directed by Prince (who already proved he can’t direct). It’s not looking good, is it?

So, imagine my surprise when I popped in the DVD and discovered that it was actually amazing! No, I’m joking, this film is very shit. Even the DVD title screen somehow made me angry – that’s how bad it is. But we’ve come this far, so let’s talk about what happens in Graffiti Bridge.

The film follows on from Purple Rain insofar as Prince is still competing with Morris Day to see who is the king of night time entertainment in Minneapolis. It’s a dubious title – rather like being the most interesting person to work in the accountancy department – but there you go. Only now Prince and Day don’t just play in bands: they each own a club, and are in direct financial competition with one another. Day hatches a plan to get rid of Prince and take over his club (which is called the Glam Slam, of course).

Prince, though, isn’t too fussed; he’s more interested in getting all philosophical and spends most of the film running about with his poet girlfriend Aura. Of course, Prince can’t show any actual sex because God hates sex, so instead we get endless intellectual foreplay where Aura reads her poetry and Prince looks all doe-eyed (it really is unbearable). Occasionally the whole thing stops so a song can be shoehorned in (these are the good bits).

To settle the matter Prince challenges Day to a winner-takes-all battle of the bands. At first it looks like Prince will lose because Day and his band The Time are so unstoppably hot. But then he realises he can win by singing a hymn (I shit you not). So, the film ends with Prince belting out an ode to God before he and Day decide to put aside their rivalry and be best buddies forever. Oh, and then Aura gets run over and killed for no reason (I guess he couldn’t resist having a least one moment of violence).

What else can I say about Graffiti Bridge? It is the sort of film that simply doesn’t get made anymore. Major artists of the day like Beyoncé are simply too self aware, and have too many artistic advisors, to ever make something so shockingly awful. Instead, they’d probably turn out something with tons of high-concept shots and production tricks to cover up the fact it was ultimately bland and banal.

So let’s be fair to Prince: the man took risks. He tried to make something that was arty, interesting and that made a statement (although god knows what that statement was). Sure, he failed – heck, he failed miserably – but that’s okay, because failures have to happen if you’re going to make anything meaningful. I for one admire him for that… but I’m also glad I’ll never have to watch another one of his films ever again. Rest in peace, sweet Prince.