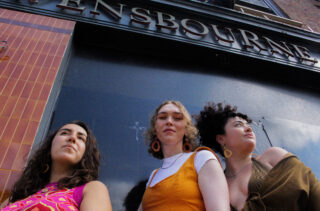 As we emerge from the pandemic (for now, anyway), things look pretty bleak for many independent venues across the country. Rising business rates and a decade of cuts to arts funding had left many in a precarious position pre-Covid, and an unprecedented period of closures and reduced capacities proved the final straw for some. Deptford’s Sister Midnight Records, a tiny basement venue and vinyl shop much beloved by its local community of grassroots artists and fans (many of whom rallied together for last year’s DIY SOS compilation) initially looked to become another such casualty, until founder Lenny Watson [pictured above, centre, with co-founders Verity Hobbs and Sophie Farrell; credit Abi Fleming] developed the idea of moving on from the initial venue to start an entirely community-owned space in nearby Lewisham.

The campaign to turn the abandoned Ravensbourne Arms pub into a community asset is now well underway; shares in the venue are available now, and with the support of a whole host of local artists, politicians and organisations, the fundraising drive to accumulate the necessary money for the project is off to a flying start. We caught up with Lenny to hear more.

Tell us about the initial Sister Midnight in Deptford: how you came to set it up, the community that was built around it, and what you learned from the experience of running the venue.

I started Sister Midnight in 2018 just as I was finishing my undergrad degree in fine art. A lot of my artistic practice at the time was focused on the changing face of the UK’s music culture; exploring the epidemic of grassroots venues closing down and understanding why these vital cultural spaces, which act as the seedbed of the music industry, were vanishing at an alarming rate. Whilst this was going on I was volunteering at a tiny record shop and music venue tucked away on a backstreet in Deptford. When the owners told me that they were planning to close the space down, I realised it was time for me to put all my research into action.

I scraped together savings and the last of my student loan, took on the lease, and that’s how Sister Midnight was born. It seemed like an insane thing to be starting whilst I was still trying to finish my degree, but looking back it was the best decision I made. The community around Sister Midnight was the constant inspiration for the space; we became quite rooted in the DIY music scene and the politics and ethos of that subculture became embedded in what we were doing. Sister Midnight was a place where everyone came together because of their love of the local music scene, they supported each other’s creativity and ideas, and they supported us in keeping the place going during tough times, of which there where many.

The biggest lesson I learnt running Sister Midnight was that grassroots DIY spaces are precarious and often unsustainable. The high cost of rent and licensing, especially in London, makes it difficult to survive week to week. During the pandemic when we had to close, our building started to fall apart, and because we were still scraping the barrel to pay rent we couldn’t afford to carry out the repairs and improvements that we needed to make the space safe for gigs in the future. It really hit home then how crucial ownership is for venues like ours. That’s why we’ve launched our campaign to save the Ravensbourne Arms and bring it into community ownership, so we can create a venue that will be sustainable long term, and carry on providing a platform for creativity and emerging talent.

Can you outline your vision for the new venue at the Ravensbourne Arms? Why that space, in that part of London, and why now?

We want the Ravensbourne Arms to be a hub of creativity, community, and of course, music. We want it to be everything Sister Midnight was and more; a thriving grassroots music venue showcasing the best of Lewisham’s music culture, a classic pub stocking locally brewed ales and serving a classic Sunday lunch, and a true community hub that works to achieve positive social change not just within the space, but in the wider community. We’ve known about the Ravensbourne Arms for a couple of years now; it seems criminal that a space like that should sit empty for years when it could be revived as a real community asset.

Lewisham Council recognises the importance of this space, and this was a factor in their decision to protect the pubs status and not grant planning permission for it to be turned into flats. We have an opportunity now to buy the pub back from the property developers that currently own it, and make it something special. What’s going on in South London right now, musically and creatively, is really exciting and we’re proud to be a part of it. I really believe that it’s a time that will be looked back on as a culturally important moment in music history. Lewisham is celebrating its status as Borough of Culture in 2022, and we can’t think of a better time for a formerly beloved pub to be brought into community ownership and transformed into a culturally important space that celebrates Lewisham’s creative heritage.

The community share offer gives local people the chance to truly take ownership of the venue: could you tell us how this will work, and the process has been so far?

It’s been a huge undertaking, and such a big learning curve. It’s taken nine months for us to plan all this and prepare to launch our community share offer, which went live on Crowdfunder at the end of September. Anyone can become a co-owner of the Ravensbourne Arms by investing in our community share offer. When you invest in community shares in Sister Midnight, you’ll become a member of our society, which means you’ll own the society and its assets alongside other members. So once we save the Ravensbourne Arms and buy it, you’ll actually be a part-owner of a pub!

You’ll also get voting rights, giving you a say in how things are done, and because our society operates on the democratic co-operative principles of one member, one vote, voting power can never be bought. Everyone has an equal say regardless of how big their shareholding is. But there is a benefit to investing more money: we’ll pay 3% interest on shares and our share offer should be eligible for Social Investment Tax Relief (SITR), which means the bigger your investment, the bigger your income tax savings will be! After year three, shareholders can even start withdrawing their shares from the society and get their money back. So shares really work a bit like a savings account, except you’re helping to achieve social good at the same time. Shares start at £100, but we don’t want anyone to be financially excluded from this initiative, so we’ve also got an affordable shares scheme which anyone can apply to if they want to be considered.

How has the response to the project been so far?

It’s been incredible. From the moment we launched our first community consultation back in January we’ve felt incredibly supported by the community. Local residents, bands, businesses, councillors, our MP, funding bodies and national organisations are all backing the project, and it’s been great to see so many people coming together and working to make this happen. We raised over £20k in the first week of our share offer being live. We’ve got a way to go yet before we hit our target, but we’ve seen how much the community want this – and there’s a huge power in that. If just 1% of Lewisham’s population invested the price of an average festival ticket, we’d hit our target with £100k to spare.

On a personal level, what are you most passionate about in relation to the venue – what do you hope to achieve with it, and what drives you to accomplish a project as ambitious as this?

The driving force behind this project is my love of music and the social and political change it can inspire. Music is a powerful tool for communication and a powerful way of bringing people together. At Sister Midnight, we had such a strong community around the space. People from all walks of life came together there because of their love of music, it was a place where creativity, and experimentation and risk taking was celebrated. That’s what I want to create again, but I don’t want to be tied to the same profit-oriented business structures that held Sister Midnight back.

It’s time to revolutionise the way venues exist and are run – it’s the communities around these venues that make them what they are, so they should be owned by the communities they exist in, and run by those communities in a way that benefits everyone. Community owned pubs in the UK have a 100% survival rate, they’re not-for-profit and they give the community a genuine say in how they’re run. What we’re trying to do with the Ravensbourne Arms is part of a growing movement of community businesses. Our campaign is a call to action; let’s leave behind the tired capitalist models that are constantly threatening our cultural spaces. Invest in the Ravensbourne Arms and join us in proving that there is an alternative to all this. We can save our venues, our pubs, and our cultural institutions and put the future of these important spaces in the hands of our communities and make sure that they continue to exist for generations to come.

Find out more at sistermidnight.org