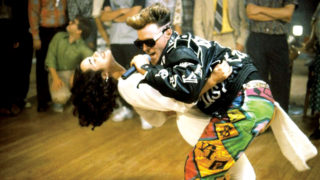 One thing I’ve learned while writing Singing Pictures is that most band movies are bad. I’ve written around twenty editions now, and I would say that about five of the films were half-decent and only two were genuinely good (Slade in Flame and Help!, in case you are interested).

There’s a good reason for this – the motive of a band film is to make money, not make a good movie. Insane Clown Posse didn’t make Big Money Hustlas (or its follow up Big Money Rustlas) because they had something serious to say on the subject of police incompetence in inner city America. 50 Cent’s Get Rich or Die Tryin’ was not aimed at raising awareness of the problems faced by those who have to go through life being utter bell-ends. Even The Beatles’ A Hard Day’s Night wasn’t intended as a challenge to England’s endemic class system – that part was just a happy accident.

No, all of these movies were made because the band – or, more likely, the band’s manager – wanted to make a bit more money. And, as Hollywood proves with painful regularity, almost all films made on this basis are bad. They lack a creative centre, a purpose…a soul. They suck.

Of course, you could say that Singing Pictures simply isn’t a representative sample, since it is based entirely on my tastes and what I choose to review. Writing about rubbish films is funnier (and, if I am honest, easier), so I have an inherent interest in picking films that aren’t much cop, or that I think could make for good copy. Maybe there are lots of good band films out there I am simply not covering?

I wish that that were the case, but it simply isn’t true: you should see the shit I’ve spared you from (Kelly Clarkson’s From Justin to Kelly comes to mind). I’m afraid that band films are always going to be crap cash-ins that follow a single rule: the more talentless the star, the worse the film will be.

All of which, I am very sad to say, brings me to the subject of this month’s column: Cool as Ice, starring Vanilla Ice. As I alluded to a couple of paragraphs ago, writing about a bad film can be fun, as you get to make all kinds of jokes and silly asides without having to say anything too serious. That’s not the case here. This film is simply too awful for any joke or irreverent aside to assuage the pain and anger it makes you feel. I deeply regret my decision to watch this film.

For a start, Vanilla Ice – real name Robert Van Winkle – is an entirely unlikeable character. He has twice been arrested for beating his wife, and later blamed her for both incidents. For his most famous song ‘Ice Ice Baby’ he ripped off Bowie and Queen’s ‘Under Pressure’ and refused to credit them (he claimed, amazingly, that the riff was different). He even has one of those douchebag beards that makes it look like his chin has been dipped in shit.

As I said, the more talentless the star the worse the film will be, so of course Cool as Ice is a real stinker. The basic premise is actually quite realistic: Vanilla Ice is a brainless, no-talent moron who roams around acting like a complete imbecile. He does this by trying to win the love of Jenny, who is going out with a boring, pushy boyfriend (Nick) who is meant to be an even more massive dick brain than Vanilla Ice, which of course is impossible (having said that, Naomi Campbell makes a brief cameo in Cool as Ice and she runs pretty close).

To achieve his goal he jumps his motorbike in front of her while she is riding a horse. Can you imagine being so insanely arrogant that you think this is a good idea? Of course the horse spooks and throws her off. But, rather than immediately calling the police and saying ‘can you please arrest this man for his crimes against rap… oh, and he also just tried to kill me with his motorbike?’ instead Jenny just hits him a few times and calls him a jerk.

Believe it or not, he does later succeed in winning her love via a demonstration of his rap “talent”. First he threatens to drop some ‘funky’ lyrics, then proceeds to produce a series of rhymes so awful that they would make a children’s bath-book blush. My conclusion: Vanilla Ice is to rap what Lambrini is to Champagne – a cheap, shit, sugary substitute that does severe damage to your brain.

Later on it emerges that Jenny’s brother, Tommy, has been kidnapped because Jenny’s dad used to be a police offer and some of his old enemies want revenge. In what might be the most shoehorned plot of all time Vanilla Ice saves the day by rescuing Tommy and returning him home, earning him the love and respect of Jenny and her family. Vanilla Ice and Jenny then ride off into the sunset on his motorbike.

Throughout the film Vanilla Ice’s attitude towards women is disgusting – he sees them as objects to be won and controlled, and he isn’t afraid to be physically, verbally and sexually intimidating in several scenes. What kind of sick mind would willingly agree to be shown in this light?

I leave you with this question: who was the first rap artist to reach number one in the US charts – was it Run DMC, NWA or The Beastie Boys? Nope: it was Vanilla Ice. A man of monumental self-absorption and stupidity. A man who looks like the evil Russian guy from Rocky IV only more, well, evil. A man who can’t rap. The world is a pretty fucked up place.