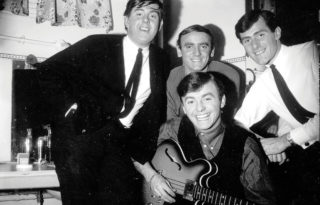 Andrew Anderson sat through Gerry & The Pacemakers' 1965 movies. It's like A Hard Days Night, but a lot worse.

FERRY CROSS THE MERSEY (1965)
In July 1964 The Beatles released <em>A Hard Day’s Night</em>. It didn’t cost much to make (around £200,000), wasn’t all that original (plenty of films featuring bands had already been made in the 50s) and hadn’t got a star cast (aside from The Beatles, of course). Nevertheless it was a smash success due to its charm, humour and The Beatles’ burgeoning popularity. It changed the cultural landscape, made millions at the box office and is one of the most influential films of all time. But we’re not here to talk about<em> A Hard Day’s Night</em>.

Instead, lets take a look at <em>Ferry Cross The Mersey</em>, which came out just one year later. It also features a band from Liverpool (Gerry and The Pacemakers), was produced by Brian Epstein (who also managed them) and is shot in black and white. However, this is where the similarities end; this film did not change the cultural landscape, make millions of pounds or influence anyone at all as far as I can tell (if anyone ever saw it in the first place). Which is a shame, because in its own way it is rather sweet movie, which documents the love lead singer Gerry Marsden has for his hometown. However, it also has a number of notable deficiencies that explain not only why this film was not a success but also why The Pacemakers never came close to matching The Beatles’ success.

Problem number one: the title song. ‘Ferry Coss the Mersey’ isn’t a bad track as such but it is, well, a bit wet. The guitar riff is kinda cool, the lyrics and vocals are strong, but ultimately It’s more likely to send you off to sleep than send you to the top of the charts. The film doesn’t even contain the group’s classic rendition of Rogers and Hammstein’s ‘You’ll Never Walk Alone’<em>, </em>which is like the Kingsmen doing a film and not including ‘Louie Louie’, or Chris Evans making a film and not being a total twat.

Problem number two: The Pacemakers. The Beatles always looked so natural on screen, exuding an indefinable charismatic quality… whereas The Pacemakers look rather like a group of 30-something accountants dressed up for a wedding (what I like to call ‘Futureheads Syndrome’). It would be alright if you’d hired them as a Beatles cover band for a function, but as onscreen stars they fall short. Two of them are called Les, for Christ’s sake. Even the genuine presence of Gerry Marsden, who here resembles a cheerful Tony Hancock, can’t quite compensate for this. One similarity with The Beatles: The Pacemakers can’t act for shit. Also, these days ‘Pacemaker’ just makes you think of someone with a heart condition – it isn’t a rock and roll image.

Problem number three: the plot. Plot isn’t crucial to a top band flick, but the one here is a bit thin all the same. The opening sets it up as a gritty northern kitchen-sink drama, which it quite exciting – it’s all soot-stained streets and kids in ragged clothes – but this social realism never really materialises. Instead, it shifts into silliness, with the band stopping off in multiple points around Liverpool as they try to write a song for a big talent contest. They play one number in each location (on the ferry, in a restaurant, at an art school etc.) and by the time they’ve done all that there really isn’t much space left for story. Also, people keep asking if they’ve written a hit and they keep saying no, which makes you think they don’t have much confidence in their own songwriting.

Problem number four: the Asian restaurant. The band stop off at an Asian restaurant and behave in a way that wouldn’t be acceptable today. I’m not for a moment suggesting they or the film is overtly racist but this scene – which includes a joke about Asian people eating dogs – has not aged well. Not horrific, but to modern eyes and ears more than a bit offensive.

Problem number five: Jimmy Savile. A bit of a shock, this one. Just as I was starting to settle down and buy into <em>Ferry Cross The Mersey</em> Jimmy Savile shows up in a cameo as the talent show compere. He looks a bit like a dodo in a wig, and spends most of his time on screen waving his arms around like a total tit. These days there’s no way of seeing Savile without thinking ‘that man is a paedophile’, which kills the fun-time vibes a bit. Not the band’s fault, but still an issue.

Problem number six: <em>A Hard Day’s Night</em>. That film had already happened a year before, so no matter how good this one was it was never going to have the same impact…and no amount of saying ‘smashing’, ‘gear’ and ‘fab’ can fix that fact.

But enough of the negatives because, as I said at the start, it really is a rather sweet film in its own way. It has some good songs (like ‘Why Oh Why’ and ‘Think About Love’), a rather good car chase sequence done in the style of a Mack Sennett silent film and, while the band aren’t on-screen sex bombs, you can’t help but find their innocence rather endearing. If you like 60s beat groups and British invasion bands then you’ll like this film.

Gerry Marsden clearly loved Liverpool; the film’s dialogue even has him say how he will never leave (unlike The Beatles, who pissed off to London as fast as they could). I guess that is what I take away from <em>Ferry Cross the Mersey</em>: The Beatles were an international band who made their home wherever they laid their guitars – The Pacemakers belong to Liverpool and are theirs alone.