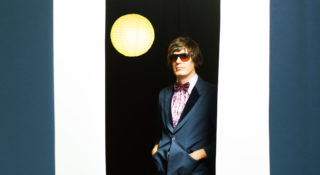 He met Bowie, makes a cracking poached egg and hates Donald Trump. Just don't read your phone while the bassist is chatting to you.

This month sees a couple of new Strokes projects get off the ground, from Nick Valensi (CRX) and the group’s enigmatic bassist, Fraiture. Now recording as Summer Moon, the ‘quiet Stroke’ (as rock lore dictates him to be known) opens up in our GTKY questionnaire.

The best piece of advice you’ve been given
There’s no such thing as divine talent, everything can be learned or figured out.

If you could only eat one food forever, it would be…
Chocolove Dark Chocolate with Almonds and Sea Salt.

The film you can quote the most of
My Own Private Idaho.

Your favourite place in the world
Miami Beach during Spring Break because of the amazing nightclub scene.

The one song you wished you’d written
‘True Love Will Find You In The End’ by Daniel Johnston.

The most famous person you’ve met
David Bowie backstage at Roseland. A true gentleman. He answered all my questions about his music and production.

The thing you’d rescue from a burning building
Let it burn and start over.

The worst date you’ve been on
I narrowly escaped an undercover police arrest trying to impress my date with reckless vandalism of a marked car. But I think it worked because we’re married now.

Your guilty pleasure
Locked Up or Candid Camera.

The worst present you’ve received
My grandparents gave me a used travel iron that didn’t work for Christmas.

The characteristic you most like about yourself
My dance moves.

Your favourite item of clothing
A red suede tasselled motorcycle jacket that I wore at the O2 Wireless Festival in ’06. Now, I threaten to pick up my kids from school in it if they don’t listen.

Your biggest disappointment
The ending of The Never Ending Story.

The celebrity that pisses you off the most even though you’ve never met them
Donald Trump.

Your biggest fear
A celebrity being elected president of the United States of America.

The best book in the world
Win Or Learn. I’ve never read it but I like the title.

People’s biggest misconception about yourself
That I broke the zoom.

Who would play you in a film of your life?
Julia Roberts.

What is success to you?
A nauseating amount of bling.

What talent do you wish you had?
Three shell bottle cap dealer.

How would you choose to die?
Set adrift in a hand-made canoe.

What is the most overrated thing in the world?
Internet grammar.

What would you change about your physical appearance?
I’ve always been intrigued by the idea of pandrogeny.

What’s your biggest turn-off?
Having a conversation with someone while they scroll on their phone.

What would you tell your 15-year-old self?
One day, your calculator will be in your telephone and beepers will be embarrassing.

Your best piece of advice for others
Don’t believe everything you read, especially on the Internet.