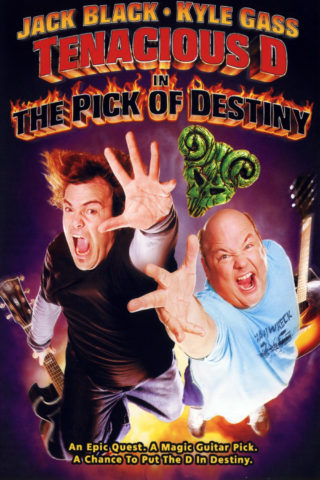 Tenacious D became a big deal in 2001 just as I was getting seriously interested in music. This was really bad news for me, because it meant that every time I turned on MTV2 in the hope of hearing The Strokes’ ‘Last Nite’ or The White Stripes’ ‘Hotel Yorba’ I’d instead get doused in the stream of shit that was Tenacious D’s hit, ‘Tribute’.

I didn’t know much about music back then, but I knew that I hated ‘Tribute’. I hated Jack Black’s endless enthusiasm, which always brings to mind an over-excited pug puppy that just won’t piss off. I hated the music, which felt like something an inept sixth form stoner could have come up with. I really hated the fact that the video was five minutes long and had Dave Grohl in it (whose band Foo Fighters I also hated). But most of all I hated the fact that the song – a comedy song, let’s not forget – wasn’t even funny. And yet, this video was top of the ‘most requested’ lists every single week. How could this be? It was at about this time I realised most people on earth are idiots – or at least the ones that watch Kerrang! TV were.

This loathing has stayed with me ever since, to the point where I can’t watch anything with Jack Black in it – even if it’s recommended to me by someone whose opinion I respect (an example being Richard Linklater’s 2011 film Bernie). Given how ubiquitous Black was in the period 2005-2015 this was problematic.

The most annoying part about the whole thing is that all the anecdotal evidence suggests Black is actually a nice guy. On several occasions I’ve typed ‘is Jack Black a cunt in real life?’ into Google in the hope of getting some facts to back up my burning hatred, only to find loads of posts, stories and pages documenting what a ‘friendly’, ‘charitable’ and generally ‘lovely’ person he is (the bastard).

Could it be that I’m the one in the wrong here – that Jack Black, and by proxy Tenacious D, are actually good? To find out I watched their 2006 film Tenacious D in The Pick of Destiny. Guess what: it was a bit shit. But not quite as shit as I thought it was going to be. Here’s why.

The first half-hour of The Pick of Destiny is mostly fart and weed jokes (I thought it was impossible for farts to not be funny – this film proves I was wrong) and documents how Jack Black and Kyle Glass met one another. It then transitions into an adventure film, as the two set off to find a special guitar pick that will allow them to become amazing musicians (and thus pay their rent).

Unlike many band films, this one actually had a pretty decent budget. It is well shot, and the plot moves along at a good pace. Sure, a lot of the humour is based around weed and ogling women’s breasts, but it is no worse than many other silly films that I’d happily watch. There’s even an improbable cameo from Tim Robbins to keep you entertained.

The whole loud/quiet dynamic is fine for the Pixies (come to think of it Kyle Glass does look a bit like he could be Black Francis’ tubbier older brother) but with Tenacious D tracks it just gets very wearing. Listening to an album of theirs is rather like hearing a crap cover version of ‘Bohemian Rhapsody’ played on repeat.

Then there’s the lyrics – they just aren’t funny. One of the key elements in comedy is surprise, which means good comedy songs are not easy to write, because once you’ve heard it once you know what is coming when you hear it again. This is a massive issue for Tenacious D because they only have one joke: namely, interjecting the words ‘cock’, ‘rock’ or ‘fuck’ into any situation. Here’s one verse from their song ‘Car Chase City’:

Car chase city that’s the name of my game,

It was all groovy now it’s totally lame.

See what I mean? There’s about 15 songs like this scattered throughout the film and, as a result, you can’t really ignore them. And you know what – it’s a shame that Tenacious D’s songs are so terrible, because otherwise The Pick of Destiny is actually not that bad… I’d even go as far as to say I enjoyed some of it. Yes, it is silly and over reliant on pot smoking tropes, but it’s got some funny moments and the dynamic between Black’s boundless energy and Glass’ gentleness works really well. Even Dave Grohl wasn’t totally unbearable in his cameo as the devil. It’s just those fuck/cock/rock songs that are the problem.

Another thing I realised while watching this is that I might be a bit more like Jack Black than I’d care to admit. I’m always making rubbish jokes about farts, cocks and fucking (so I’m told), so maybe this is why I have hated Jack Black so much all these years: he reminds me of the most embarrassing parts of who I am.

Since hating yourself isn’t a very healthy thing to do I’ve decided that from this day forth I’m going to try my best to not hate Jack Black. Maybe I’ll even watch Bernie. Just don’t expect me to listen to a Tenacious D album anytime soon.