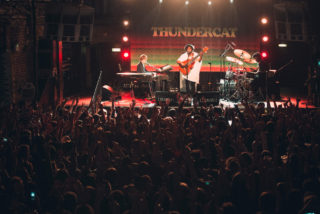 Stephen Bruner produced Kendrick Lamar's 'To Pimp A Butterfly', but performing his own material, he hits the sweet spot between technical jazz and melodic wizardry

Thundercat is a feline of few meows. For most of tonight’s performance, he confines himself to a simple “thank you” every five songs or so, letting the words jut out humbly from brief lulls between breakneck jazz bass workouts and stomping, swaggering neo soul. But it appears even a creature this taciturn can’t resist a mum cuss if the opportunity arises: when a well-watered heckler yells, “show us yer tits” during a rare pause in the show, the artist known to the taxman as Stephen Bruner retorts, with a chuckle, “show me your mom’s tits!”

It prompts pantomime whoops from the crowd and a naughty schoolboy snigger from Bruner that feels rather emblematic of the show in general. “I really don’t give a fuck,” he smiles, contemplating his quip, and then proves it with another burst of insouciantly virtuoso bass-playing that has more in common with Squarepusher’s thousand-notes-a-second mad scientist act than it does with any of the 70s soul touchstones that characterise his latest LP.

Indeed, that character shift is an unexpected joy tonight: on stage, many of ‘Drunk’’s smooth homages to yacht-rock and Stevie Wonder are injected with an almost thrash vigour, with several songs remodelled as springboards for Bruner (and his terrifically natural drummer and keyboard player) to ad lib in short, dazzling blasts. The spectacle is not just aural, either: as whip-cracking snare hits thunder down at furious pace, it’s difficult to take one’s eyes off Bruner’s left hand as it snakes around his impossibly wide six-string bass fretboard, appearing to move both in slow motion and at warp speed simultaneously.

Thankfully, though, Bruner clearly understands that the allure of such muso wizardry lies in its short doses, and so for every minute of deadly technical, freakazoid fusion there’s another five of both melody and musical wit, be it via the whimsical charm of the ode to his pet cat (complete with a crowd meow-along), the slinking sorrow of ‘Them Changes’, or reworkings of his contributions to Kendrick Lamar’s ‘Complexion’ and ‘These Walls’ into instrumental hip-hop bangers that combine his soulful falsetto with further dashes of lightning-fast, possibility-defying runs down the length of his bass. The revamping of ‘Oh Sheit It’s X’ into a Daft Punk-style disco floorfiller, though, is perhaps tonight’s masterstroke: a deft end-of-set decision, it underlines the suspicion that Thundercat is not only a technical phenomenon in complete control of his instrument, but also a performer with real empathy, in complete control of his art.