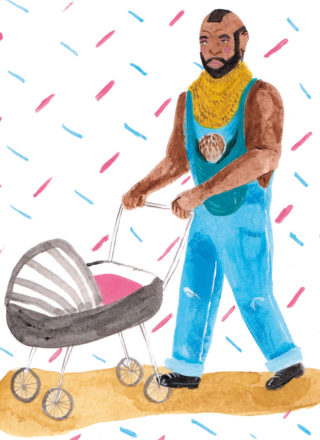 Anyone can play guitar, well, kinda.

One look into Mr. T’s dead eyes in the video for ‘Treat Your Momma Right’, and you can see the moment a cold realisation hits his chain-laden soul. Stood there in a pair of budgie-smuggling camo print shorts, sharing a stage with three mumsy-looking backing singers, and moving with the awkward, uncertain mobility of an early Japanese human robot prototype, T’s mind is clearly elsewhere. He’s there in body, but as he intensely stares into some existential void (or the autocue) he’s trying to reach his happy place – like the right side of a choke hold or the inside of a Humvee.

Somewhere around his time as Rocky III’s Clubber Lang, the A-Team’s B.A. Baracus, and an Alvin and the Chipmunks cameo, Lawrence Tureaud was also embarking on a wholesome mission of which Helen Lovejoy would approve. Thinking of the children, the motivational video ‘Be Somebody… or Be Somebody’s Fool!’ arrived in 1984 with Mr. T growling helpful advice at the ’80s yoof. From tips on how to dress fashionably without buying designer labels (naturally) to how to make tripping up look like breakdancing (an essential life lesson), it later spawned an album of the same name, roping in another famous T (Ice) to write some raps.

So where ‘Workout’ encouraged lazy kids at a bus stop to use a boom box as a free weight, ‘Frustration’ saw T stubbornly try to play the cello, extolling the virtues of determination as he eventually learns how.

Even with these highlights, ‘Be Somebody… or Be Somebody’s Fool’ wasn’t T’s true musical masterpiece: that arrived in ‘Mr. T’s Commandments’ – his purpose rap EP for kids. Taking it upon himself to help guide the youth of America through life’s travails once again, T’s lessons on love, not talking to strangers, doing homework and saying “no!” to drugs confirmed that T took his paternal role seriously. Dishing out advice and PG-rated violence on the video for ‘Mr. T’s Commandment’, he combined words on how to love and respect your parents with hurling various miscreants through windows in his very literal take on a powerful message.

A fighter, an educator, and a kick-ass baby-sitter (probably), Mr. T’s influence as a role model may have become more meme than mentor since his ’80s heyday, but with lines like “Honor thy mother and father/The Bible makes it clear/If you break the rule, God help you fool/You got Mr. T to fear!” he’s a kind of gruff, violent Santa all kids should believe in.