Danny Brown isn’t going to lie to you. He may have made his name off the back of outrageous punchlines, but the heart of his music has long been the honesty with which he approaches difficult emotional territory. He might at one moment feel “sorta like Squidward and his clarinet”, and in the next be talking about how “the downward spiral got me suicidal/ But too scared to do it, so these pills’ll be the rifle”. The great thing about him is the way that he’ll treat both lines with equal weight and let you decide what you want to hear.

On his breakout record, XXX, and its follow up, Old, Brown generally split up the tracks between where he played the goofy superhero and where he talked about more serious subjects. Since 2016’s Atrocity Exhibition, however, the two sides of his persona have come together into a more ambiguous whole. Brown’s leaned further into grimy, absurd punchlines – a typical line on new album uknowwhati’msayin¿ (produced by Q-Tip) goes “I die for this shit like Elvis”. In amongst them, though, it’s not hard to find references to regrets piling up, abusing drugs to forget and the weight of trauma. Just as Brown’s persona anaesthetises himself with sex and drugs, it’s easy for the listener to use the out-there punchlines scattered through his records to distract from the underlying sadness that permeates his discography.

The man himself is currently in higher spirits, coming off the first run of his TV show on VICELAND, Danny’s House. He’s just as animated and exciting an artist as ever, but I get the sense during our brief conversation that he’s happier rolling out this album than at any point in the last few years. It’s no coincidence that the hook of one of uknowwhati’msayin¿’s standout tracks goes “ain’t no next life, so I’m trying to live my best life”.

I spoke with him over the phone to talk about mental health, YouTube conspiracy channels and sensory deprivation tanks. 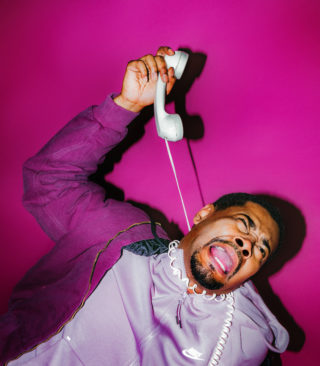 “Q-Tip wanted me to go back to how I rapped on The Hybrid.”

He wanted me to keep my voice a little more controlled. As far as the writing, he let me do my thing, but he just wanted to make sure that the performance was up to par with what he wanted.

It’s less stressful for me. I’m usually making these albums – I’m finding beats and I’m usually doing everything by myself – so just to ask someone to go to work with you helps, you know what I’m saying? Ain’t nothing like strength in numbers.

I’m approaching ten years doing this. At this point I feel like I’ve built my own universe, you know? Sometimes you see people work with stuff that don’t even match up and it gets weird sometimes, so for me I only want to work with people who can work in Danny Brown’s universe.

It’s different, working with Q-Tip. Usually at this point I’d be screaming and kicking shit all the time, working myself to death – but you know, working with Tip has been the easiest process of putting an album out, I would say. I think I’m just at a different point in my life right now. I’ve been doing it for so long, I know what I’m getting myself into now. A lot of stuff isn’t uncharted territory no more. I think I’m just happier in my life right now.

I’m like a home person, I stay in a lot. My girl, she’s teaching jiu-jitsu classes and stuff. I just hang out at the crib for the most part, so I’m not doing too much. Not partying. I’m not partying or nothing like that no more.

I was doing a lot of Adderall, man. It’s like, once you stop doing certain stuff then other stuff stops too. So that’s where I was, and I just started taking better care of myself. I stopped caring too much, you know what I’m saying? I found myself being one of those people who gave a fuck about the wrong shit, you know? You’ve only got so many fucks to give in life, man; you can’t be worried about the bullshit. Now I’m not stressing myself out over stuff I can’t control.

I started doing sensory deprivation, so that helped a lot. It almost gave me like an ego death kind of thing. You can zone out and a lot of crazy shit can happen when you’re floating but it just made me stronger mentally, you know? It’s almost like you go die. That’s the only way I can describe it – it feels like you die for two hours, so once you get out of that tank you feel refreshed, you’ve got a whole new take on life.

That’s my cable, that’s my TV in some sense. I watch a lot of conspiracy theory breakdown channels and stuff like that.

Beige Frequency is probably my favourite YouTuber. He does documentary-style content about comedians or weird people. Another one of my favourites is this guy Dank Net. He finds the freaks of the world on YouTube and makes documentaries about them, it’s real cool. He finds these real eclectic characters who are just around on the Internet and makes in-depth documentaries about them, it’s hilarious.

That’s the basis of [my Twitch stream]. I’m into a lot of different stuff, like playing RPGs – my homies just play Madden and 2K, shit like that – like FIFA. Not too many people are into RPGs where I’m coming from, so it’s good to go on a platform like that and be able to meet people from different walks of life who are into the same things that I’m into, you know?

I’m trying to get more involved with the videogame world too, like doing soundtracks and scoring. Not so much just putting rap songs in videogames but actual scoring; I’d love to be involved with that. And I’m studying more with my comedy, taking acting classes all the time – I’m part of a YouTube series called Dad, so I’m just working on stuff like that.

I think that side-scrollers are coming back – people are being more creative with the retro-looking games so I’d love to work on a cool side-scroller. Like Cuphead – I really loved Cuphead, as much as it frustrated me and I died 3 billion times, I love the music and I love the look. That game is real artistic – videogames can be art too.

“I often have a one-dimensional portrayal in the media.”

Half of it is my fault too, but I think it’s cool. We can see the growth. I don’t have a problem with it: we always knew there was some depth there, all the time if you really listened to the writing, the music. I just didn’t like it when people would come in to meet me like they already knew me, you know? I hate when I meet someone and they’re like, “you’re so chill, you’re not like the crazy crazy Danny Brown I expected you to be”. It’s like, what the fuck did you want me to do, jump off the table?

I don’t think it’s any song I regret making, some of them I just wouldn’t play in certain situations. I don’t regret making anything, it’s all art and it’s all… everybody’s in a different time and place in their life in certain situations. I want you to see my immaturity, you know? I want you to see all of it. I’m not doing it on purpose, it’s an organic thing but I just hate when art is so fake you can just tell. It’s too perfect.

I just don’t take myself too serious like that. I’m just very self-aware. I don’t blow smoke up my own ass, you know what I’m saying? And nobody else’s.