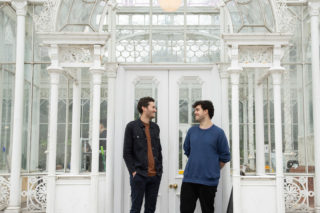 "Satan is scary, he also provides something useful. He gives you an understanding of the world."

If you were setting out to find the Devil’s birthplace, the first place you should go is an air-conditioned room in Stockholm. This is the National Library of Sweden, where the vast illuminated manuscript Codex Gigas is kept. If you were to somehow get past the reinforced glass and turn the musty pages, darkened with centuries of light exposure, you could get to page 290 recto – a vast image of Satan, horns dripping with blood and twin tongues writhing around his neat white teeth.

This is where the Devil begins, if you ask Tom Lenton of electronic duo Delmer Darion. “While the Devil dates back a lot further than that, from my research [the 14th through 17th centuries] is the period where the average person had the most acute sense of the devil as a physical agent who could intervene in daily lives. That was always the most interesting place to start, I think. It partly speaks to why the page 290 recto in the Codex is so interesting, because it feels like a symbolic starting point in the history of the devil.”

The duo’s debut album, after five years spent recording, is due to be formally announced in the next couple of months. It traces the history of Satan, filtering medieval dread and 1980s paranoia into a beguiling mixture of IDM, shoegaze and ambient music. Their newly released track ‘Wildering’ shows off the IDM and ambient influences to great effect, all shattered vocals and hypnotic guitar building to a terrifying noise climax.

The record as a whole, though, feels closer to the more out-there explorations of Boards of Canada, especially the shoegaze and psych selected for last year’s Societas X Tape. It makes similar stylistic leaps between genres and styles, but – like Boards of Canada – Delmer Darion never lose their own identity to the concept or to the genres they choose to work in. 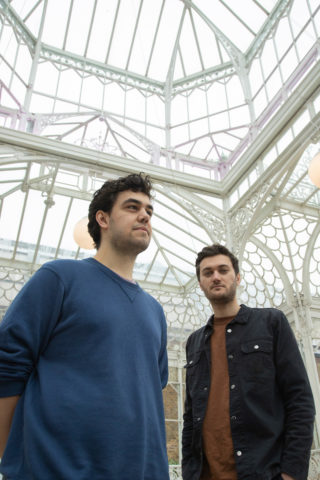 The birthplace of this duo isn’t quite as beautiful as the Bohemian monastery where the Codex Gigas was first written and illuminated. The Benn Hall is a sturdy chunk of 1960s municipal concrete just off a roundabout on the A426, squatting awkwardly between the Rugby Borough Council offices and Newbold Road Car Park. It was here where Delmer Darion first met, at a preteen Battle of the Bands. “We were in Year 6,” says Oliver Jack, grinning at Lenton, who has his head in his hands. “Tom was playing in the Battle of the Bands, and I was a viewer, so obviously he’s the rock god doing Enter Shikari covers.”

The pair got to know each other better at secondary school and their early experiments in Ableton began. “We’d hang out for an afternoon and make something,” says Jack. “And it was never a complete song, some of them are so bad.” It surely couldn’t be that bad, I say. It’s now his turn to be embarrassed. “I… this, this is on me,” he says. “I did a Fatboy Slim-style remix of Adele so it’s got these big Fatboy Slim drums and this little synth line that’s like doo doot de doot doot. That’s the worst, by far.”

Years of late school nights making beats and mucking around in Ableton followed. “It’s now been nearly 15 years of most weeks sending each other something.” says Jack. Eventually things became more serious for the pair, with a smattering of Bandcamp releases surfacing in their late teens and university years. The duo also cultivated an interest with film, taking their name from a surreal death in Paul Thomas Anderson’s Magnolia. This eventually surfaced as a recurring fascination with weaving concept and story into their music: “Even when we were like 14 or 15 I remember having visions of putting together an album with quite a heavy sense of concept and some sense of narrative and really dedicating time to it.” says Lenton. “Obviously it’s quite difficult though, so we didn’t.”

Eventually, those teenage fantasies came to fruition. Lenton’s long fascination with literature and the occult merged with Jack’s interests in obscure hardware and a self-confessed need for a project on the go to start the five-year process of creating a concept record about Satan. “The place that the idea came from originally was a Wallace Stevens poem, where he writes about the death of Satan as a tragedy for the imagination.” says Lenton. “Part of what [Stevens] is getting at is that for most of human history we’ve had grand, overarching narratives which help us to understand the world and our place in it – what kind of narratives does humanity need now that religion is dying? While Satan is scary, he also provides something useful. He gives you an understanding of the world.”

The album’s long gestation lends itself to the band’s extreme attention to detail. There are hidden messages throughout, written in a long-forgotten French musical language called Solresol: “It’s fragments from the Litany in the Book of Common Prayer,” says Lenton. “And one thing that a lot of people found persuasive during the Satanic Panic in the 1980s was that a lot of the ‘evidence’ was lent power by being recorded onto tape, like it couldn’t be faked. So all the Solresol parts are very heavily tape-saturated.” Jack chimes in: “Right now we’re listening very closely to the album over and over to get the final mix right, and we’re like, ‘do you remember how many hours and hours we spent on that one tiny little detail? Will anyone know? Will anyone care? Probably not.’” 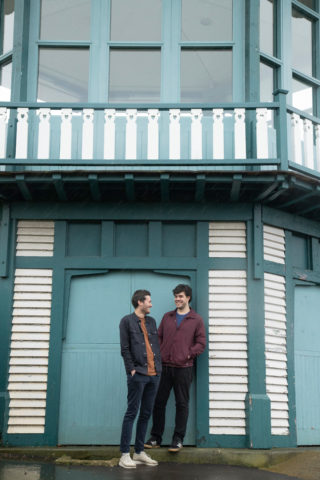 That sort of self-deprecating humour finds its own expressions on the record. After the first half of the album plunges the listener into early-modern dread of the Devil, the second half traces a lineage of possession incidents and so-called Satanic interventions across the world. The second side travels from the 16th-century investigation of Martha Brossier’s possession in France through to suburban parent’s associations in the 1980s accusing the cartoon He-Man of using occult symbolism to turn children against God. “The hope is that these things seem increasingly ridiculous until we end up in the ‘80s, we end up at the Satanic Panic and we’re looking at He-Man.” says Lenton. “The image at that point is supposed to be: this is what he’s become. The Devil is now so pathetic that he’s sat behind a TV screen manipulating children with He-Man.”

The album’s fascination with the death of the Devil, and Delmer Darion’s intense dedication to minor details, is right there on the album art. It’s based on a series of postage stamp-sized woodblock prints from the 15th century depicting Death leading away figures from all levels of society; but in the band’s version, a skeletal figure is taking Satan himself by the arm and leading him off. Oliver Jack cut the print himself on lino: “It took so long. Literally weeks. It’s one of those things – if you fuck up, it’s gone. If you slip and cut through it all… It’s not just a lot of work, it’s a lot of high-intensity, high-stakes, sweaty work.” After that, it’s thirty prints on thirty kinds of paper – and of course, they chose lokta paper because of its traditional use in sacred texts. The duo recount this with an odd glee, like they’re daring listeners to find all the hidden meanings.

After the formal interview ends, I end up chatting with the band over a quiet drink. Lenton says something offhandedly which sounds, more than anything else, like a challenge: “I was saying earlier, I always value making something interesting, and what I mean by that is that I love the idea of us making things that reward close listening and active listening. [I want people to] delve into the details, look up the lyrics, work out ‘what’s this referring to’. Just try and unpick all of the allusions.”