Since Loud And Quiet first started printing in 2005, a lot has changed for the Sleaford Mods frontman

In an Essex spare bedroom in 2005, Stuart Stubbs put together the first issue of a new fanzine called Loud And Quiet; soon, he’d be working 14-hour days from his mum’s house in Southend to get the magazine off the ground.

A couple of counties north, Jason Williamson was also living at his mum’s (in Grantham, Lincolnshire), also pursuing an ambitious new creative project, also skint. He was already releasing music as Sleaford Mods – although he was yet to meet Andrew Fearn, who would become Williamson’s creative foil and the architect of the duo’s singular production style a few years later – but aside from that promising new avenue, things weren’t going well.

“It was trying to find a sound [for Sleaford Mods], taking lots of drugs, drinking, being really really irresponsible,” he says today. “I was not a very nice person, did nothing I’m proud of. My attitude to people was not good at all. But it got me thinking that I’ve not done bad considering – because, you know, I’m not very bright.”

Periods of low-paid work came and went – in a Little Chef on the A1, in factories, for temp agencies – interspersed with stretches on the dole. All the while, Williamson kept plugging away at Sleaford Mods (by 2009, he’d released three full-length albums, as well as a string of EPs and singles) and, according to him, ranting online.

“This is where Facebook comes in handy. Ahead of this [conversation] I just went down the timeline and I was able to find quite a lot of information from between 2004 and 2009, and every status update was just embarrassing. I had to stop looking, it was just so wrong…” We move swiftly on, through the most significant years of what has been an eventful time for Jason Williamson – and, of course, for this magazine. 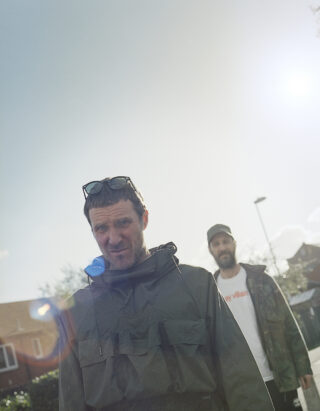 JW: By some miraculous stroke of luck, I met my wife in 2009. I met her in July, and things did start to change a little bit, but my work and my personal life were still fractious. But she really put those things aside and invested in me – she saved my life. If I hadn’t met her I would have ruined myself, to the point where Sleaford Mods would never have had a chance.

I was making this album Spectre on my own. I met Andrew on 14th October 2010, supporting a noise artist from Los Angeles called John Wiese. And Andrew was DJing downstairs; everyone knows this story, but that’s the night I met him. And we met up just before Christmas and did a song called ‘All That Glue’. And we didn’t bother getting in touch again until sort of early 2011. And that’s when we started writing songs for Austerity Dogs, but we put those on an album called Wank first. Yeah, that was released around summertime 2012.

It was September 2014, right before we went on tour with The Specials. I remember leaving work on the last day, and it was an anti-climax. I left work and went straight to Glasgow, booked into a hotel and I’ve put my bags on the floor of the hotel room, and it suddenly dawns on me: “This is my new job.”

In a lot of respects, I went from one job to another, although obviously I’m singing in a band and one of the most interesting bands at the time in the country. But you have to work – this wasn’t early Oasis or something, selling millions of records. It was just thousands and thousands of records.

It took me a while to adjust to not working nine-to-five, Monday to Friday, not wearing a uniform. It probably took six or seven months. And then I started slipping into it, but it felt like I just kept going along. It wasn’t until I stopped drinking that I thought, “This is a new thing.”

2016 was kind of a rebirth. I stopped drinking completely. Stopped taking drugs. Stopped smoking. And it became an absolute revelation. I think that’s when it truly kicked in as to what I was doing – that I was a professional musician. Or whatever.

It was like a big sigh of relief, like a weight had been lifted. It was weird. I felt lighter, like I’ve got rid of the thing I’ve been trying to get rid of for years, taking drugs and having comedowns. My intake had got worse. My habits on drugs had got worse. And I couldn’t escape. It was horrible. But when I finally managed to, [I realised] you have to do it on your own – nobody can help you.

It affected everything, to a degree. I stopped halfway through the [2017 album] English Tapas recording sessions. It shows on that album – a lot of people consider it to be a bit weak. I just saw it as a rebirth; there are songs on there where we stretched that sound differently. We needed to – we won’t repeat [preceding album] Key Markets or any of the other albums. What’s the point?

We’ve effectively had two years off. We’ve done a few festivals, but it still doesn’t feel real – I don’t really feel like I’m in a band anymore. We’d constantly toured, as that was the only way we could make money, so to go without that is an odd proposition. We had a lot of plans which had to get called off.

Baking Daddy [a series of online videos featuring Jason wearing only an apron and suggestively fondling his kitchen utensils as he whips up various cakes, breads and brownies] just came from being bored at home. If you remember, we weren’t allowed out for more than an hour each day. It was pretty intense. Everybody had taken to their phones; literally everyone was living on the screens. So it didn’t feel wasteful – I was trying to find ways to entertain people and entertain myself.

We’re going back out on tour in a couple of weeks. [Last album, released earlier this year] Spare Ribs has felt like a success, but because I’m not backing up the songs with live performances, I feel like it’s a bit redundant. I think Andrew feels better about it. But it’s fucked with me a bit – turning 50 as well, the whole midlife crisis… I’m 51 next week and I’m in a band, that’s what I do – that’s fucked up. It’s not been good on the old psyche. But I’m starting to come out of the negative things now.