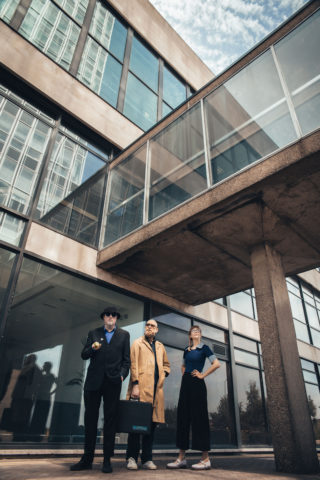 Well, that was fun. The past two years Adrian Flanagan (Eccentronic Research Council) and Dean Honer (All Seeing I) spent time turning their originally fictional band The Moonlandingz into a tangible, touring circus. Sometimes their shows saw Johnny Rocket (Lias Saoudi) where earrings made out of a loaf of bread and other times stuff a waterproof poncho up his bum. It was highly entertaining.

But for the moment – at least – The Moonlandingz are back in their box, and the duo have a new project to play with. Enter: INTERNATIONAL TEACHERS OF POP. Which also includes (sometimes) vocalist with The Soundcarriers and Whyte Horses Leonore Wheatley.

They’re calling it “nerd disco”. They only started making music at the beginning of this year – the trio came together at a Circuit Bending workshop in South Yorkshire (where Leonore teaches music). Their first show was supporting Jarvis Cocker at a show in The Devil’s Arse (a cave in Derbyshire, proper name Peak Cavern).

You can hear their debut single ‘Age Of The Train’ below. A groovy love letter to our beloved rail network – y’know, before it turned into an expensive, shambolic mess.

It’s out on Desolate Spools/Republic Of Music form today (12 July).

The Eccentronic Research Council The Moonlandingz