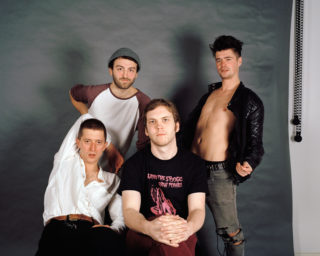 And check out their new video for 'Stutter'

The scenes in London, Leeds and Bristol were all out-doing themselves in 2017. It was a breakout year for the likes of Idles and Shame, but also saw the likes of LICE, Yowl and plenty others coming through.

You can add Heavy Lungs to that list, even though they formed less than a year ago, and, up until now, have played fewer than 10 shows. The four-piece, who got together in spring 2017, have already supported the likes of METZ and the aforementioned Idles.

Now, they’ve written and recorded their spiky, combative debut EP. ‘Abstract Thoughts’ will be self-released via the band’s Bandcamp on 2 February, but you can stream it ahead of that (below).

And, talk about 2-4-1, today they’re also sharing the video for brand new track ‘Stutter’, directed by Elliot Pearce. In terms of the background of ‘Stutter’ the band said: “Lyrically, it’s about the inherent feeling of detachment and the inability of committing to anything due to fear of failure.”

Heavy Lungs have a couple of shows soon, too with details of their first London gig to be announced shortly.