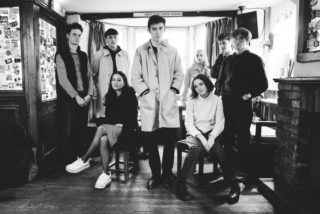 A band that refuse to finish a song

There’s a Middle Eastern feel to tumbling sax riff on Nervous Conditions‘ new track, ‘The President’ – or at least there is on this recorded version that will appear on the band’s forthcoming debut EP.

The thing is that the 8-piece band from a village in Cambridgeshire don’t consider this the finished track, and the same goes for any of their music. They will record their songs, but that’s not the end of them being written and adapted.

This approach to making experimental post-punk was inspired by a Pere Ubu show that singer Connor Browne saw, where the band supported themselves with an improvised set. Browne watched Pere Ubu’s David Thomas conduct his band and suggest different directions mid-song, and Browne liked that. Thomas would tell his band to “play me some lounge music from mars,” and shout at them when they were getting it wrong. So when Nervous Conditions get onstage they know how ‘The President’ goes, but they also know that changing a riff in the middle is probably a good idea to keep things interesting, even if it does mean that they’ve already ditched a whole album they’ve recorded, having decided that the songs don’t really sound like that anymore.

Last year we posted their track ‘Village Mentality’. We didn’t know much about them, and we still don’t. We are starting to understand why so many people are going on about their live shows though.