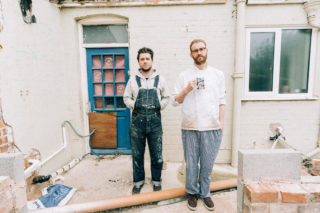 Quick recap, then. JOHN are two guys, both with the name John, from south east London. One plays guitar, the other sings and drums. They independently released their debut album God Speed In The National Limit in late 2017. Idles are fans. So much so they took them out on tour across Europe in 2018. You might’ve caught them.

Anyway, it’s time for new stuff from JOHN. First up, the thumping track below ‘Future Thinker’. They’ve self-produced the video, which is trippier than you’d expect from a bunch of London Underground escalator footage. There’s a new album coming, too. Out Here On The Fringes will arrive in October. They’re calling it “a collection of songs that abstract the quotidian encounters on the fringes of a city.”

At the end of this month (29 May) they headline the Lexington in London. They’re taking the night off from cheffing and decorating (that’s them in their work clobber by the way), so do skip work too and go see them.