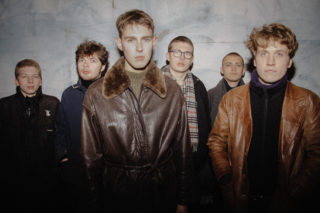 It’s a strange cocktail of feelings watching the sun come up after a particularly heavy night out. A bit triumphant, a bit sobering, but mostly a practical reminder to pass on that final warm rum ‘n’ Coke and crawl into bed.

Pardans’ new track is kind of about that, but also a little bit more cryptic. Explained here:

“The song is about losing yourself to drunken nights and navigating through a fog of lost love and seductive forces. It’s about the ironic applause of the dawn as it watches you claw your way back to your den. It’s about two female gazes. One belongs to the most beautiful girl I’ve ever known.”

You might be thinking, ‘fine, okay, but who are Pardans?’

They’re a six-piece from Copanhagen. They describe the music they make as “a mix of intense orchestral no-rock, including tenor saxophone and viola”. Their sax-player also plays with Marching Church, the Iceage associated project. This past summer, off their own backs, Pardans toured for two weeks across Europe playing everything from a squatted Belgian mansion to a boat on the Seine to abandoned factory buildings and theatres.

They put out a mini-album, ‘Heaven, Treason, Women’, back in autumn 2016. Now, they’ve put together their debut album recorded totally live in the studio. ‘When Come The Rats’ is the first track from it.

By the way, they’re playing Eurosonic in January.