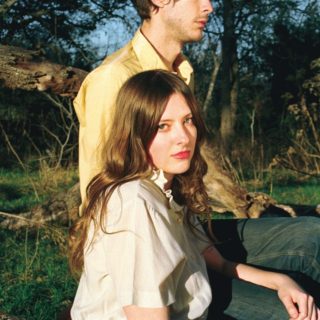 It’s only been a year and a half since Austin-based singer-songwriter Molly Burch released her debut album, ‘Please Be Mine’, but on her new record, ‘First Flower’, she sounds like a singer reborn. Where ‘Please Be Mine’ found Burch dealing with the aftermath of a breakup and leaning on the more melancholic end of her talents, for the most part, this is packed with rolling, sunny riffs and playful pastiches of American songwriting.

It’s not that this is any less personal than that first outing, but more that Burch has embraced the parts of her craft that set her apart, most obviously her unmistakable voice. Trained in Jazz Vocal Performance, Burch is able to conjure strange and powerful pronunciations and inflections like few of her peers. Comparable in equal measure to Angel Olsen and Nico, her voice is bassy, oddly punctuated and entirely captivating. On opening tracks ‘Candy’ and ‘Wild’ she turns simple refrains like “I’m outrageous / Don’t come near me / I’m so contagious” and “There goes my baby / There she goes” into moments of wonder.

As ‘First Flower’ progresses, Burch plays with Americana, jazz, Motown and old-fashioned rock ‘n’ roll, borrowing from each cannon with wit. On ‘To the Boys’ she deploys surf-ready guitars lines and the backing vocals to take down loud-mouthed male critics who presumably took umbrage with the more sombre moments of her debut. However, it’s closing track ‘Every Little Thing’ that will really silence them as Burch calls out in simultaneous desperation and defiance “I’ve worn my body down / I’m done”, her voice in full, jaw-dropping, force.