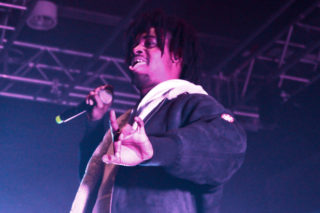 Ian Curtis is not your typical hype man. Usually when a rapper takes to the stage they have support in the form of pumping music and a flurry of enthusiasm to build their arrival. Not Danny Brown. He plays Joy Division’s ‘Atrocity Exhibition’, which he has named his new album after. It’s six minutes of wavering, queasy guitars that build with a lurking and menacing dread, filling the room with an edge and oddness rarely encountered at such a show. But even a cursory listen to Brown’s latest (and best) LP are enough to know he’s someone who operates far beyond the limits of just one genre. The album is a startling collection of tracks that explores the world of avant-garde and electronic music, just as often as party bangers and big name collaborations.

The opening lyrics to ‘Downward Spiral’ create an intensely vivid scene. Like walking into the gruesome guts of a party that’s gone beyond what was thought possible. A twisted and demented world of drug use pushed to its limits, unprotected sex and a sweaty coating of paranoia. We’re not plunged directly into this world when Brown arrives on stage with a huge striking grin; instead we’re thrown deep into something of a parallel universe via the hedonistic consumption of ‘Die Like a Rockstar’. There’s a heavy thud of bass that rattles the room and Brown’s unique squaking voice pierces above it.

He’s accompanied by DJ and producer Skywlkr and on occasion the music calls for more than just backing tracks. During the first half of the show it can feel a little plodding at times and struggles to shift out of a template and a pace. On record, Brown is renowned for breaking out of the genre he supposedly belongs to but tonight the performance feels like he’s playing into it, at times. That said, the breadth, oddity and uniqueness of his output is always going to feel mildly cheated in a capacity that can’t capture all the depth, tones and wonky crevices of it.

His interaction is minimal throughout the night “My name is Daniel,” he says at one point, before erupting into a massive giggle that borders on the manic. 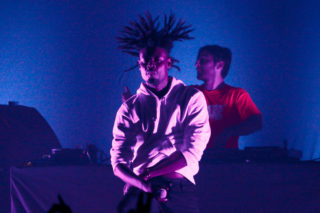 The set is heavy on old material, too, including tracks like ‘Blunt After Blunt, ‘Smokin and Drinkin’ and ‘25 Bucks’, the latter of which benefits from the backing track set-up, as the pristine and perfect recording of the female vocal (Purity Ring’s Megan James) allows Brown’s vocal to run wild over the top. But the evening is sadly light on new material until the last four songs and when he informs people new stuff is on the way he says, “you don’t sound too enthused” before the Kendrick Lamar and Earl Sweatshirt featuring ‘Really Doe’ explodes to life and leads to the wildest reception of the night. He plays only the first part of the song, cutting it short before his guests would normally enter.

He then bursts straight into ‘Make it Rain’ and the momentum carries furiously. It’s at these moments when Brown is locked into a backing of spitting electronics and propulsive bite that he feels most alive and potent. The run continues spectacularly with ‘Dance in the Water’ and ‘Pneumonia’ and it really hits home what a stunning achievement Brown’s latest work is as it explodes in burst of gut-wobbling bass with Brown pacing the stage back and forth with a possessed mania.

The exclusion of ‘Ain’t it Funny’ feels slightly at odds with the show and set-list but regardless it’s an intoxicating closing from a man who knows the merits of and boundaries of intoxication better than most.