Stephen Malkmus: In 1982 central California, it was the golden age of hardcore – groups like Minor Threat and Black Flag and the Circle Jerks. Those bands had solidified their sound and message, and that was mixed with new wave, because the early ’80s was defining itself, like, ‘we’re not going to be like the ’70s’. Mixed with the continuation of hard rock from Rush and Van Halen, those were the three kinds of music that I liked, for better or worse.

I was playing bass in a hardcore band in Stockton. We were called The Straw Dogs, after the Sam Peckinpah movie. There was a substitute teacher who kind of fancied us… not in a bad way – I think he was bored in the town, but the punk scene would encompass ages 15 to 24, because it wasn’t very big, so anyone who was into it, you would hang out with. He told us to call our band that, and we were like, ‘sure dude, that sounds tough and punk’.

There was some talk of us going down to record with Spot, who was the producer of SST bands in Los Angeles, but it never happened – apathy and heroin. People started getting into heroin, unfortunately; in my town and in my band. There was one dude who was a brilliant chemist on a scholarship to the university. He was a punk guy who looked like Sid Vicious because he was so pale and always high. If you gave him Codeine pills he could convert them into something stronger that was almost heroin. So punks were doing that, and they were also just scoring heroin downtown, and it became the scourge and ruined the scene. Some people died, obviously. It got druggy.

The first Straw Dogs show was in Sacramento opening for Toxic Reasons and T.O.S.L., who you might be familiar with because they had a song called ‘I Wanna Fuck The Dead’. They were a pretty straight-on hardcore band and a well respected one. We did not go down well. Our best shows were when our singer got a mohawk. Then people went crazy. It was like, why do people like us now that our singer has a mohawk? Why does that inspire people to beat each other up into a pulp, which is what we considered a good gig, unfortunately.

My other hobbies away from music were playing soccer and tennis, smoking weed and trying to meet chicks. I was a pretty good student, but the competition wasn’t very high. I’m noticing it now that my daughter is in public school that some people really don’t give a fuck. It felt like at my school there were only two nerds in the whole school. And this was the start of there being a computer room. I’d think, what are those nerds and losers doing going in there? And now I wish I had done it too. Not that I’m upset with my standing, but it’s funny to look back and know that something that’s had such a jaw-dropping influence in our world was starting back then.

I then went to college in Virginia, where I met all of these guys who are the reason that you’re talking to me right now – David Berman and Bob who I formed Pavement with. Those bands from me being 16 were a good gateway to things that happened in college. I wouldn’t have been able to get into The Fall when I was 16.

We started Pavement straight after college. I made the first record when I was back home visiting my parents. It’s hard to believe but we got our foot in the door from John Peel and other things like The Wedding Present covering our song as a b-side, and it all worked out. If you give a grifter an inch he’ll take a mile. 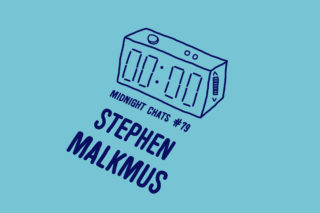